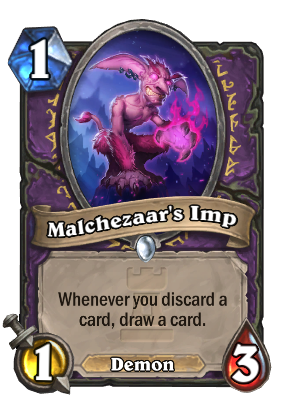 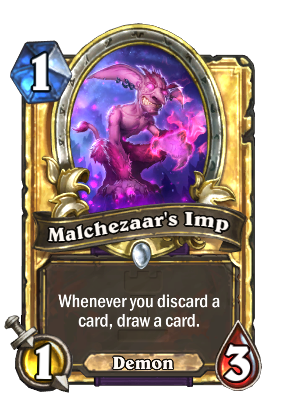 Whenever you discard a card, draw a card.
Flavor text

Malchezaar used to have an imp named Dobby working for him, but there was a tragic accident.

Malchezaar's Imp is a common warlock minion card, from the One Night in Karazhan set.

Two copies of regular Malchezaar's Imp are obtained by defeating Free Medivh!, the final encounter in One Night in Karazhan's fourth and final wing, The Spire.

As a Wild-format card, both regular and golden versions of Malchezaar's Imp can also be crafted for the following amounts:

The strategy for this card is simple: play a powerful card which discards cards from your hand, and the Imp will draw more to replace them, negating the drawback. However, this will still deplete your deck, accelerating the approach of fatigue.

This minion has synergy with Silverware Golem and Fist of Jaraxxus, allowing you to gain those cards' effects and still draw a card.

As mentioned in the notes, this card has great synergy with Deathwing.