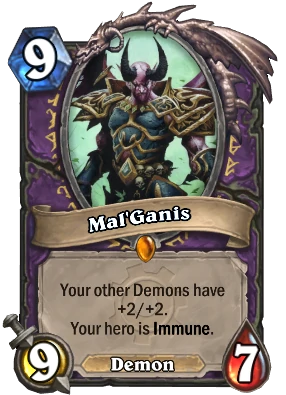 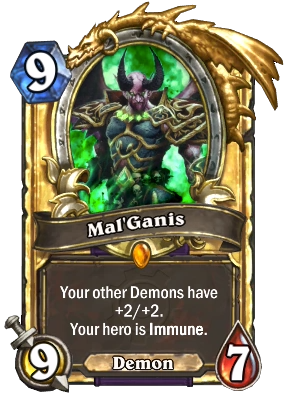 BG removed tavern minion
Your other Demons have +2/+2. Your hero is Immune.
Flavor text

Mal'Ganis doesn't like being betrayed, so if you discard him, watch out.

For the boss in Book of Heroes, see Mal'Ganis (boss).

Mal'Ganis is a legendary warlock minion card, from the Goblins vs Gnomes set. 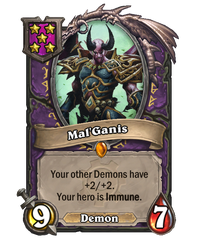 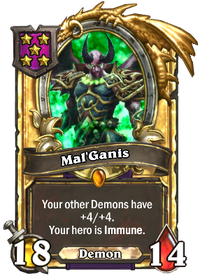 Mal'Ganis can be obtained through Goblins vs Gnomes card packs, or through crafting.

Mal'Ganis is an extremely high-power minion with a very strong persistent effect that greatly benefits demon-based decks, but his high cost and relatively low Health makes him difficult to leave up without assistance. Protecting him is a must, so avoid playing him without any protection, such as Taunt minions. Save any Stealth granting mechanics (i.e. Finicky Cloakfield) for Mal'Ganis.

Mal'Ganis is even more impactful if he can be brought out earlier with cards like Voidcaller, Possessed Lackey, or Darkest Hour. Similarly, reviving him with Bloodreaver Gul'dan is a huge blessing because he will buff every other demon that's been resurrected with him.

Beware that your opponent may use take control effects such as Sylvanas Windrunner, or copy effects such as Faceless Manipulator, to make themselves the recipient of Mal'Ganis' abilities. Floating Watcher's effect cannot be activated while Mal'Ganis is rendering the hero Immune, making the two cards somewhat antagonistic.

Mal'Ganis is an excellent target for Carnivorous Cube, as not only will two 9/7 bodies be summoned upon the Cube's death, the two Mal'Ganis will buff each other, making them both 11/9s. This effect actually poses an impact as 9 health brings them out of the range of effects such as Crushing Hand, Crowd Roaster, Flame Lance, and Anomalus.

"You hear the voice of the Dark Lord. He whispers to you through the blade you wield... What does he say, young human? What does the Dark Lord of the Dead tell you now?" - Mal'Ganis, to Arthas

Mal'Ganis was one of the nathrezim sent by Archimonde as a jailor of the Lich King. He was chosen to head up the plot to turn Prince Arthas to darkness, and make him the Lich King's greatest champion.