This article is using {{Card template}}.
See Help:Style guide/Card for how to edit this kind of article.
Edit this article
Majordomo Executus
2281 • BRM_027
Regular 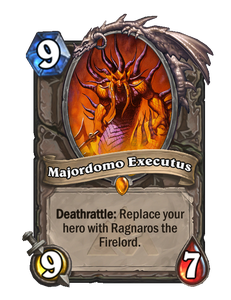 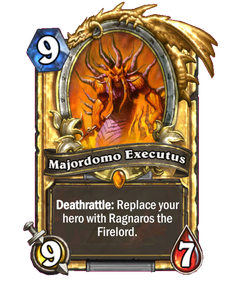 You thought Executus turned you into Ragnaros, but really Ragnaros was in you the whole time. 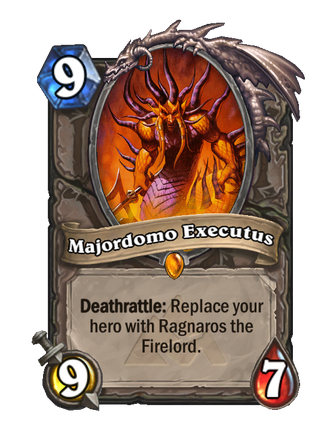 Majordomo Executus is a legendary neutral minion card, from the Blackrock Mountain set.

This card's Deathrattle replaces the controlling hero with Ragnaros the Firelord, and changes their Hero Power to

DIE, INSECT!. The Ragnaros hero has a maximum and starting Health of 8, although this can be raised to 15 through 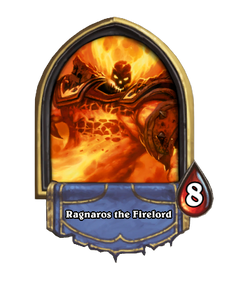 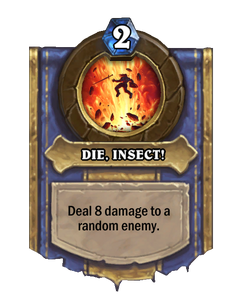 Example: A player that has used their Hero Power will be able, after being replaced by Ragnaros, to immediately use DIE, INSECT! in the same turn too.[16]

Following its release, Majordomo Executus has been credited with being the worst legendary in the game. While its stats are poor for its cost, the card is primarily criticized for its Deathrattle, which has a significant chance of directly leading to the player's defeat. This is due to the 8 Health of Ragnaros, which allows him to be easily destroyed following his arrival. The card is especially dangerous when played in the early game since Ragnaros will replace the hero regardless of their current Health. Although the replacement Hero Power is potentially extremely powerful, the chances of the card backfiring have led to widespread rejection of the card. It is meant for very late game when your opponent has exhausted all of their options; if played too early the player runs the risk of losing due to low Health and an inaccurate Hero Power.

However, if used in a properly constructed deck, it can be very powerful. It is critical that the Deathrattle be advantageous to the player, either by having Majordomo die when the hero is below 8 Health and Armor (thus acting as a heal), or because the board allows time for the player to make use of their new Hero Power. Armor-granting effects like

Ice Block can be very effective in stabilizing after transforming into Ragnaros.

Alexstrasza's Battlecry, if targeting yourself, increases your maximum Health to 15, allowing for more recovery via heals. A popular combo involves discounted

Maiden of the Lake and

Coldarra Drake to repeatedly use the hero power for low cost. With the introduction of Forged in the Barrens, playing

Reckless Apprentice after transforming into Ragnaros provides an alternative strategy in Wild, with the potential to trigger the hero power 9 times in succession if your opponent has a full board; and this effect can exaggerated by playing two on the same turn, or by also using a card like

Brann Bronzebeard to trigger the battlecry twice. The result can be quite devastating to the opponent, with the potential to fully clear a large board and deal a potentially lethal amount of damage to their hero.

If your opponent has

Sylvanas Windrunner or another card that can mind control or copy and they steal Majordomo Executus, you can punish them by triggering his Deathrattle and finishing off the fragile Ragnaros hero. This card has very good synergy with the

Awaken the Makers Priest quest. Not only does the Majordomo count towards quest progression,

Amara, Warden of Hope will quintuple Ragnaros's maximum health, removing its crippling weakness. In addition, it's possible to combine this with

Raza the Chained to make your Hero Power more efficient. Since the introduction of

Treachery, Warlocks are able to take advantage of Majordomo Executus in Wild by using Treachery on Executus before swiftly destroying him, causing the opposing hero to become Ragnaros instead, leaving them vulnerable to your attacks.

The Ragnaros hero uses the following audio and written emotes in response to specific events. For more information, see Emote.

At the top of the elemental hierarchy, just beneath Ragnaros himself, resides Majordomo Executus. This

Flamewaker gained his exalted status by proving to be nearly invincible in the battles that raged within the elemental plane. Rumor has it that Executus supplanted

Baron Geddon, and the two have been rivals ever since. Although this rumor has yet to be confirmed, there is certainly no doubt that Ragnaros does not tolerate failure. Thus, the lesser flamewakers (and, of course, Baron Geddon) eagerly await a misstep by Executus, anticipating their chance to vie for the coveted attention of the Firelord.

Executus will only be spawned after you have deactivated the runes of warding. This means you'll have to defeat every other boss (except for Ragnaros, who is summoned after Executus's defeat, and Lucifron, who actually doesn't have to be killed) in the Molten Core before you can fight him. Pre-3.0.8, you also had to douse the runes using Aqual Quintessence. You obtained the Aqual Quintessence by gaining Honored status with the Hydraxian Waterlords, and completing the quest chain ending with Hands of the Enemy.

Executus comes with four Flamewaker Healers and four Flamewaker Elite guards making this a total of a nine enemy encounter. Executus will "submit" and the fight is won when all the adds are dead. He then appears in Ragnaros' chamber and will summon the Firelord to begin the encounter. Ragnaros will then, before he engages the players, kill Executus as punishment for not being able to stop them.

In Cataclysm it is revealed that

Fandral Staghelm, after becoming the leader of the Druids of the Flame, replaced Executus as Ragnaros' majordomo.