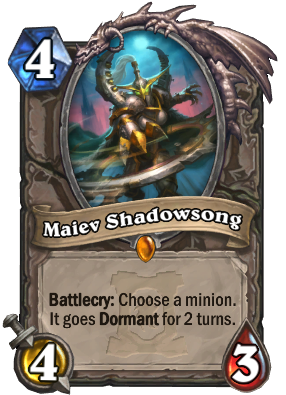 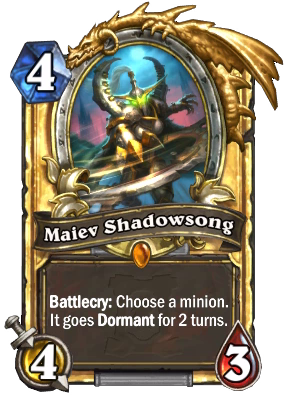 Go directly to Demon Jail. Do not attack minions, do not collect mana crystals.

For other appearances of Maiev, see Maiev Shadowsong (disambiguation).

Maiev Shadowsong is a legendary neutral minion card, from the Ashes of Outland set.

Maiev Shadowsong (minion) can be obtained through Ashes of Outland card packs, through crafting, or as an Arena reward.

Maiev's primary use is for temporarily disabling an enemy minion, removing it from play for two turns and preventing it from attacking for the next three turns. Her effect also acts as a pseudo-Silence, letting the player get past Taunt minions or prevent dangerous Deathrattles, such as Convincing Infiltrator. While not quite hard removal, her fairly low cost and decent statline makes her an excellent card for stalling midrange threats, buying time to push damage needed to win the game or to set up combos.

If possible, be ready for when the target awakens and try to deal with it before it has a chance to be used again.

Since Maiev can also target friendly minions, some unorthodox methods of using Maiev include it on a friendly Dormant minion to reactivate its awakening effect or on minions with ongoing effects or other keywords like Charge to set up combos that require them once they wake up.

It is highly inadvisable to use Maiev on enemy Rush or Charge minions, or minions like Ragnaros the Firelord and Sethekk Veilweaver that can immediately use their abilities, unless you're specifically aiming to end the game before they awaken.

Shortly after the war's conclusion and the Resistance's victory, one of the night elves' most powerful champions, Illidan Stormrage, was arrested and put on trial for attempting to create a second Well of Eternity, ultimately being imprisoned deep underground. Maiev personally volunteered to act the Betrayer's jailer, and took up the mantle of leader of the newly-formed Watchers, whose duty it was to guard the subterranean prison. For 10,000 years Maiev tirelessly guarded Illidan, until the day when one of the night elves' leaders, High Priestess Tyrande Whisperwind, entered the Barrow Deeps prison and freed Illidan in the hope that he could aid his people in resisting the return of the Burning Legion.

After Illidan was exiled in the ensuing war, Maiev took it upon herself to hunt the Betrayer down and return him to his cell in the name of justice. Maiev's anger and lust for vengeance continued to grow as she and her followers pursued the Betrayer to the Tomb of Sargeras, where she barely escaped with her life. She sought the aid of the night elven leader Malfurion Stormrage (Illidan's brother) and together they chased and engaged Illidan in the ruins of Lordaeron. Although somewhat redeeming himself by working with Malfurion to save Tyrande, Illidan was still just as guilty in Maiev's eyes, and she continued to pursue him as he retreated to the shattered world of Outland.

Capturing her prey but quickly losing him again to his allies — Prince Kael'thas and Lady Vashj — Maiev began a guerrilla war against Illidan's growing power in Outland, trapped and ever trying to recapture him with her depleted forces. Driven solely by revenge, the Warden eventually made allies, most notably the Broken leader Akama, a close ally of Illidan (who was now Lord of Outland) but who secretly resented the Betrayer's actions. Ultimately, Illidan used Akama to lure his archenemy into a trap where Maiev was herself captured and imprisoned in Warden's Cage in Shadowmoon Valley.

Eventually, however, Akama revealed himself to still be working against Illidan and, as the Alliance and Horde arrived to depose the Betrayer, Akama released Maiev and together they took part in the assault on the Black Temple. They ultimately confronted Illidan at the temple's zenith, where they succeeded in defeating and slaying him, although Maiev claimed to have felt no fulfilment with his death. She eventually rejoined her people in Darnassus, where she took on the role of a vigilante by attempting to slay resurgent Highborne and even Malfurion Stormrage himself, though her plot failed due to the actions of her brother, and Maiev fled.

Ultimately, Maiev has relocated to the Broken Isles where she is leading more of her Wardens, becoming very involved in the battle surrounding the Legion's third invasion.