This article is using {{Card template}}.
See Help:Style guide/Card for how to edit this kind of article.
Edit this article
Magtheridon
58549 • BT_850
Regular 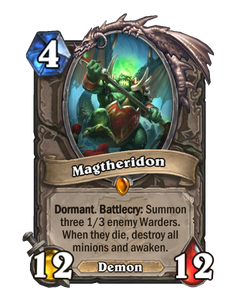 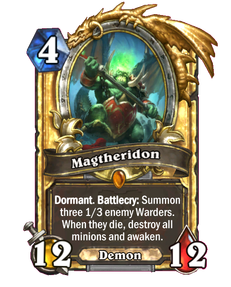 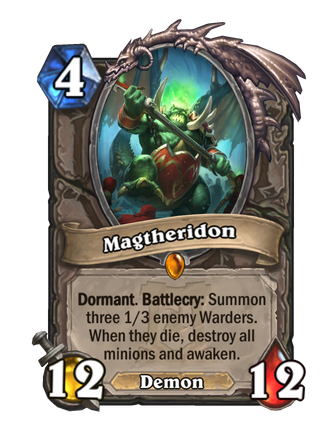 For other appearances of Magtheridon, see Magtheridon (disambiguation).

Magtheridon is a legendary neutral minion card, from the Ashes of Outland set. 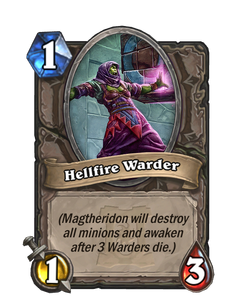 With both immense stats for his 4-mana cost and a quick board clear, Magtheridon is basically a discounted

Deathwing that costs 6 mana less but with a different drawback. Instead of discarding the player's hand as Deathwing does, Magtheridon starts Dormant and summons three Hellfire Warders that need to be defeated in order to awaken him, which can easily be done with powerful 3-damage board clears like

Brawl and any 3+ damage weapon equipped works well with Magtheridon.

Once awakened, Magtheridon neutralizes most enemy minions that pose a threat (excepting if the threat comes from their Deathrattles, or if they are Dormant, which protects them) provides a 12/12 body with no other repercussions.

The opposing player will not be able to get rid of the dormant Magtheridon when he is played, but it is possible to counter him by removing the Warders from play without killing them, such as the return to hand effect (even though they didn't start in hand) or shuffle into deck effect, transformation effects, or even forcibly summoning Magtheridon from his owner's hand or deck, creating no way to way him without his battlecry.

Magtheridon can act as a

Doomsayer-like tempo disruptor, preventing the opponent from dumping out big threats while there are Hellfire Warders in play and they have no way to remove them without killing them. Decks that are heavy in spells or weapons can stall with Magtheridon longer, since they are better able to choose when to kill the Hellfire Warders without needing to play a minion that can be traded into with a Hellfire Warder.

It is unwise to play Magtheridon if the opponent has 5 or more minions, as there needs to be room for three Warders to be summoned so that he can awaken. Killing a mere 1 or 2 warders does nothing.

Magtheridon is a bad idea to play if someone has random Resurrection effects, as he will do nothing but take up board space unless somehow another trio of warders were generated to awake him a 2nd time, such as the enemy also having resurrection effects.

Magtheridon, the former Lord of Outland, is a pit lord who conquered the ruins of the orcish homeworld following its destruction. His reign was ended by the arrival of

Illidan Stormrage, who took Magtheridon's throne at the Black Temple for himself. Deciding that Magtheridon would have a further part to play, Illidan had Magtheridon's body dragged to the Hellfire Citadel where he imprisoned the pit lord, leaving him at the mercy of the fel orcs. A group of adventurers entered the depths of Hellfire Citadel, released the former Lord of Outland from his bonds, and finally destroyed him, taking his head as proof of their prowess.