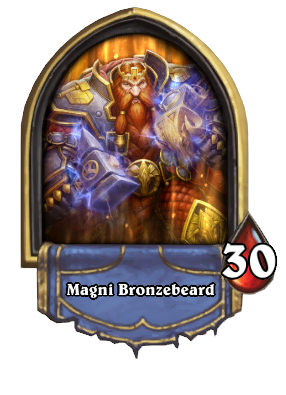 "My brothers say I spend too much time in the forge. They think it ain't befitting a king. Hah! You don't forge legendary weapons like mine while sitting on a throne. The lands of Khaz Modan are mine, and when I bring the pain, lads, it's hammer time!"[1]

Magni Bronzebeard is an alternate hero for the

Magni Bronzebeard was the king of the dwarven kingdom of Khaz Modan, Thane of Ironforge and head of the Bronzebeard clan, until he was turned to diamond during a ritual in the heart of Old Ironforge.

Magni Bronzebeard can be purchased for 1800 gold in the Collection.

Purchasing Magni Bronzebeard also unlocks a unique card back (see below), which can be used with any deck.

Once unlocked and selected for use, Magni Bronzebeard replaces Garrosh Hellscream whenever playing with a warrior deck. Magni comes with his own portrait, emotes, and hero tray art, as well as featuring a special animation when using his Hero Power, Armor Up! (or its upgraded version, Tank Up!).

When viewed in the Collection, Magni has the following flavor text: