This article is using {{Card template}}.
See Help:Style guide/Card for how to edit this kind of article.
Edit this article
Magma Rager
1653 • CS2_118
Regular 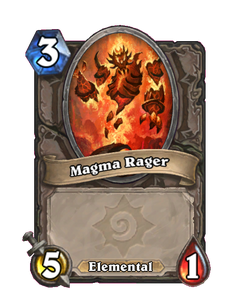 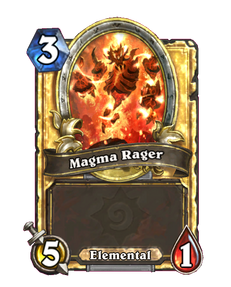 He likes to think he is powerful, but pretty much anyone can solo Molten Core now. 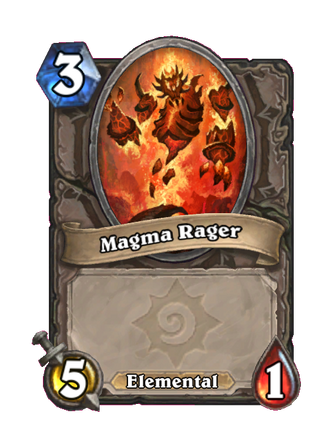 Magma Rager is a neutral minion card, inducted into the Legacy set, formerly from the Basic set. 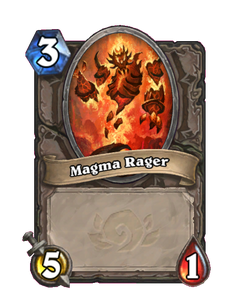 Regular and golden Magma Rager are uncraftable and cannot be crafted or disenchanted.

Magma Rager is a minion with high attack, but let down by its minimal Health. While Taunt minions can help it to survive, any damage, such as from area of effect attacks, Hero Powers such as the mage's

Fireblast, or the attack of even a 1/1 minion, will destroy it. While its relatively high Attack can make it useful for a few plays, such as combinations with

Shadowflame, Magma Rager is officially recognised as one of the worst cards in the game (see Trivia).

Steward of Darkshire. The Divine Shield lends Magma Rager some much-needed survivability, and under ideal circumstances can allow it trade very efficiently. However, there are generally still far better cards to play in Magma Rager's place, and this is easily done better by playing a

Faceless Rager is a better version of this card. In the Wild format,

Magma Ragers are level 82 elite mobs found in Ulduar. They are fire revenants, elemental creatures who serve as soldiers for the malefic Old Gods on the Elemental Plane. However, the artwork on this card actually depicts a bound fire elemental. Additionally, the flavor text suggests that the Magma Rager is found in the Molten Core, but neither fire revenants nor bound elementals can be found there.

Am'gam Rager is the corrupted version of this minion.

"Magma Rager?! Why would you play this card?" - Arch-Thief Rafaam