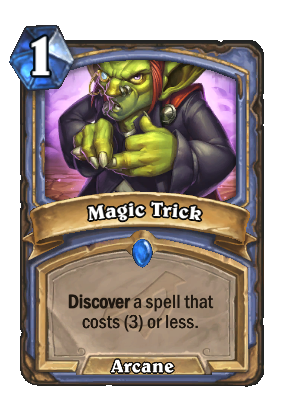 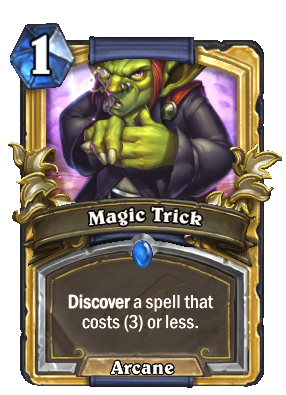 Discover a spell that costs (3) or less.
Flavor text

The world is not ready for an illusion of this depth and intricacy!

Magic Trick is a rare mage spell card, from the Rise of Shadows set.

Magic Trick can be obtained through Rise of Shadows card packs, or through crafting.

A solid searching card that can pull small removal like Frostbolt or Ray of Frost, or find any Secret. Because of the limited range of cards that can be pulled, Magic Trick fits better in a Tempo Mage deck than it does a Control Mage.

The card works well with Mana Cyclone and Archmage Antonidas to produce a cheap spell and two cards for their effects. It also becomes very strong in combination with Sorcerer's Apprentice, letting you search for 0 mana.

The artwork depicts a trick where a person pretends to pull off their own finger by hiding half of it behind their hand and using a finger from their other hand as the removed finger. Trying to pass off a very simple illusion as a magic trick is quite in character for a goblin.