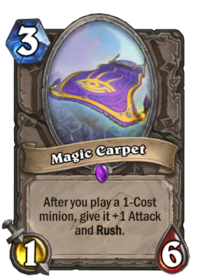 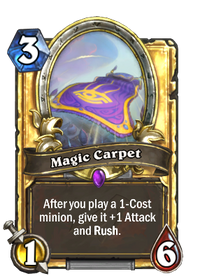 After you play a 1-Cost minion, give it +1 Attack and Rush.

Its small yet fierce riders are affectionately known as rug rats.

Magic Carpet is an epic neutral minion card, from the Rise of Shadows set.

Magic Carpet can be obtained through Rise of Shadows card packs, or through crafting.

This card's effect is limited in target, but powerful for what it does, granting oppressive board control and damage in the early game for aggressive decks. It has a lot of health for a 3-drop, so it's possible to drop it down on curve and have it survive.

Warlocks can use Magic Carpet very effectively, thanks to access to powerful 1-drops like Flame Imp and Voidwalker, plus their ability to generate Lackeys very early with EVIL Genius. Also works well in Murloc decks, since there are many 1-cost Murlocs in the game.

Magic Carpet is similar to the numerous flying carpet mounts that can be crafted by players with the Tailoring profession in World of Warcraft.