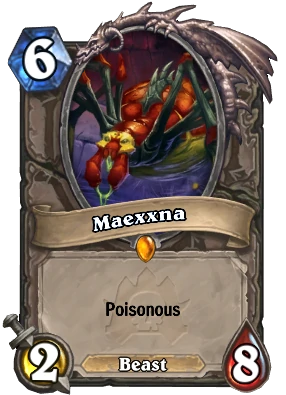 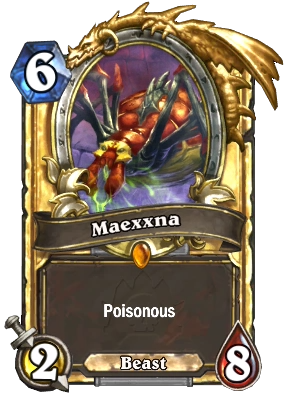 For the boss of the same name, see Maexxna (boss)

Maexxna is a legendary neutral minion card, from the Naxxramas set. 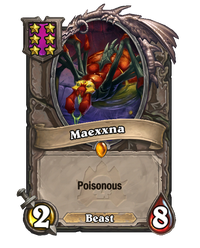 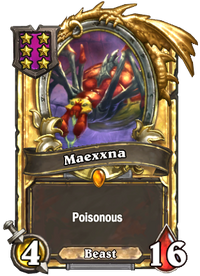 Regular Maexxna is obtained by completing the Arachnid Quarter wing of Curse of Naxxramas.

As a Wild format card, both regular and golden versions of Maexxna can also be crafted for the following amounts:

With a large Health pool and the devastating Poisonous effect, Maexxna can destroy minion after minion if left unattended to. She has especially powerful synergy with several classes:

Maexxna's low Attack makes her highly vulnerable to Stampeding Kodo, Shadow Word: Pain, Potion of Madness, or even worse, Cabal Shadow Priest. As a result, Maexxna is severely outclassed by cheaper Poisonous minions introduced after the release of Naxxramas.

The poisons Grand Widow Faerlina concocts come from the spiderlings produced by Maexxna, a massive spider taken from the depths of Northrend. She feasts on those foolish enough to enter the necropolis, producing spider after spider that Kel'Thuzad uses to his own foul ends.[1]

"Maexxna — born deep within the mountains of Northrend many ages ago, she was captured within the dread citadel Naxxramas, where she gives birth to her brood, feeding them the corpses of all who dare venture too deeply into Naxxramas."
- Commander Eligor Dawnbringer