This article is using {{Card template}}.
See Help:Style guide/Card for how to edit this kind of article.
Edit this article
Madder Bomber
2058 • GVG_090
Regular 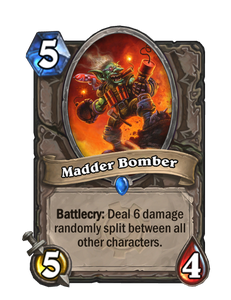 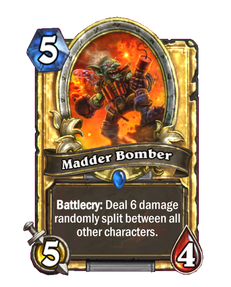 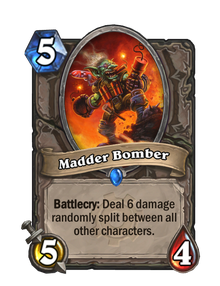 Madder Bomber is a rare neutral minion card, from the Goblins vs Gnomes set.

This minion's effect shoots 6 missiles, each one dealing 1 damage to a randomly selected character (other than this minion):

Madder Bomber is a larger version of Mad Bomber that also deals more damage with its Battlecry.

Madder Bomber's Battlecry can be useful in damaging or destroying enemy minions, especially if they are low in health or numerous. It will also trigger Enrage effects, as well as the effects of cards like Acolyte of Pain or Grim Patron. Conversely, it is inadvisable to play this card when there is a high chance of hitting friendly minions that do not benefit from being damaged, or if there are enemy minions that do benefit from being damaged.

Summon
Did someone say bomb?

"The Madder Bomber here, he sorta exemplifies that, you know, he's excited about blowing up somebody, and if you set it up right, he's blowing up your enemy... but you're never really sure." - Eric Dodds[1]

Goblins have a penchant for explosions, and are notorious for their lack of precision when employing their devices. The Madder Bomber epitomises the goblins' focus on firepower, often at the expense of accuracy.