This article is using {{Card template}}.
See Help:Style guide/Card for how to edit this kind of article.
Edit this article
Madam Goya
54346 • DALA_BOSS_59h
Regular 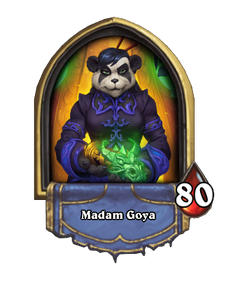 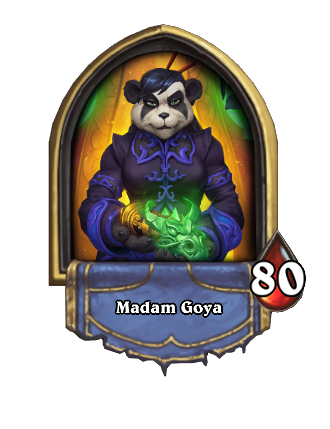 For the collectible card in Mean Streets of Gadgetzan set, see

Madam Goya is the final boss that can be encountered in Chapter 4 of The Dalaran Heist adventure. 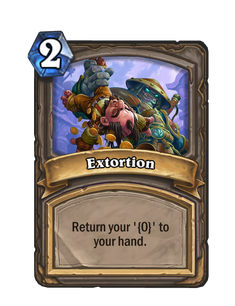 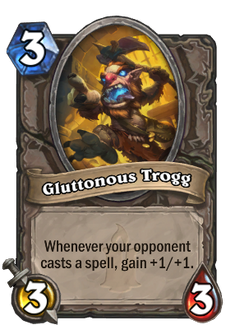 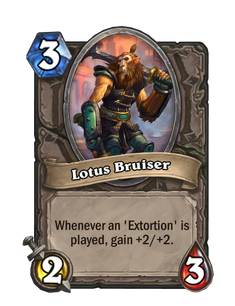 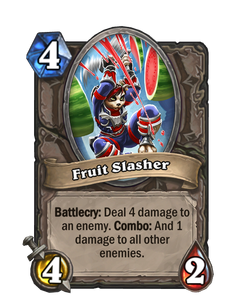 Robes of Gaudiness is absolutely bad in this encounter since

Extortion is also a card, and you can only play 2 cards each turn. If you let her replace almost all of your cards, it's almost like you can only play 1 card each turn. You only have chance to encounter either her or Boommaster Flark as the last boss of The Underbelly, so it is best not to pick this Passive.

If you are running a token or swarming deck, make sure that your minions' health is 2 or more because of her

Madam Goya plays a Jade deck with some big minions to play early due to her starting at 4 mana. However, she lacks draws and removals, and some cards do not synergize well with Jade; therefore she will run out of cards in hand after a few turns. You may want to play control and gain board advantage until she does not have anything to play.

Lotus Bruiser, which only has 2 copies. You can either choose to ignore Extortions or use them after you overwhelm the board. Remember that if you take control of Lotus Bruisers and play Extortions, they still get buffed themselves.

In rare circumstances, Madam Goya can get an endless of cards with Lab Recruiters. She also has additionally 10 cards with

Academic Espionage, so unless you play a Mill-themed deck, you may want to beat her before taking Fatigue damage.

Her Hero Power is now much more dangerous, as she always turns one of your cards into a spell card each turn, and she runs an anti-spell deck with very strong synergy to her Hero Power. Besides the aforementioned Lotus Bruiser is now also the Gluttonous Trog which benefits half as much from Extortion, but can be buffed by your other spells.

It is just a matter of time before your hand is full of Extortions and spells, while she plays minions to punish you should you play any of them, even if you do not have any choice rather than play them to get your cards back. She also summons Jade Golems for tempo.

Emerald Goggles can counter her Hero Power, especially in the earliest turns when she does not have many threatening minions. You may want to play as many cards as possible in your hand to get Extortions' cost reduced to 0, thus getting your cards back for free. A deck with a lot of 2 or 3-cost cards can take advantage of this Passive. Alternatively,

Elixir of Vim somewhat disturbs her Hero Power if you want to keep any strong card(s). Rocket Backpacks can also help you clear her minions before you play Extortions safely.

The biggest weakness of Madam Goya's deck is that it is weak in late games and totally relies on you playing spells. Without them, her minions are really weak by their own, so it's best to play Extortions or any spells as early as possible to make sure that her minions cannot get any buffs. She also lacks draws and has no hard removals at all, so taking board control should be your top priority. Try to clear her minions using minions and hero powers, and play Extortions whenever you can when those spell-buffed minions are off the board; eventually she will only be able to play one card each turn while you dominate the board.

Madam Goya
I know who you are. I know what you've done.
Revenge is a costly pursuit. (vs.

Madam Goya
Mister Chu. You know the price for betraying me.
Mr. Chu
It is sad to see us meet in such unfavorable circumstances.

Madam Goya
Speak carefully. These may be your last words.

Madam Goya
You will pay what you owe. One way, or another.
There is a price on that.
The black market takes a modest cut.
Think of this as an investment in our future relationship.
The invisible paw of the market at work.
Items have a way of increasing price at the worst of times.

Hero Power got a Treasure card

Madam Goya
What a curious artifact. I will hold onto it for you.
This item has great meaning to you. I hope I do not drop it.

Madam Goya
Bide your time.
I deal with criminals. You are nothing more than simple thugs.
The wheels in your head turn, yet... nothing.

Sometimes force is necessary.
A bit blunt for my tastes, but he does good work.

A small price to pay.
A welcome exchange.
How wise of you.
Perhaps you are not the fool I took you to be.
Some say money cannot buy happiness. They lie.
Thank you for your continued patronage.

I see my wares have found a home.
Jade. Truly beautiful.
Seeing Aya's work always fills me with pride.

Kazakus. Do not to bite the paw that feeds.

Aya my dear. The jade in your eyes, still shines just as bright.

An image of myself? How peculiar.

Han'Cho, I hope you found your purchases to be to your liking.

Madam Goya originally ran the Black Market Auction House at the Black Market on the Veiled Stair, which is to the north east of the Valley of the Four Winds in Pandaria. She accepts bids personally as she is distrustful of others.

After the events of Mists of Pandaria, she moved her operation to the Ring of Blood in Nagrand on Draenor. When Warlords of Draenor concluded she moved again, this time to the Underbelly in Dalaran at the Broken Isles.

Her bodyguard, Mister Chu is ever by her side, even when Marcus makes an appearance in A Steamy Romance Novel: Hot and Misty.

Goya likes to keep eyes and ears open near important people or places, and will go as far as to try to sneak a spy inside.