This article is using {{Card template}}.
See Help:Style guide/Card for how to edit this kind of article.
Edit this article
Madam Goya
41841 • CFM_672
Regular 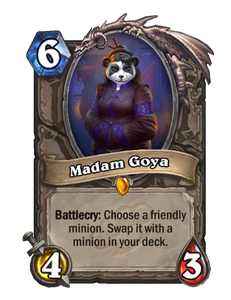 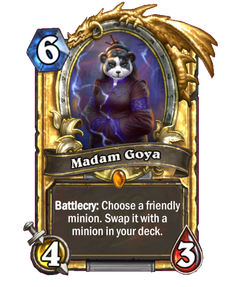 Dimensions: Full • 330 x 410px
Elite
Battlecry: Choose a friendly minion. Swap it with a minion in your deck.
Flavor text

She has set up her Black Market here in Gadgetzan for one purpose, to make a KILLING when Beanie Babies make their inevitable comeback. 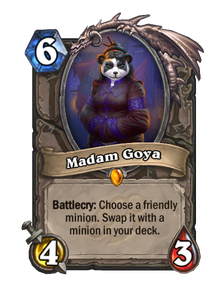 For the boss of the same name, see Madam Goya.

Madam Goya is a legendary neutral minion card, from the Mean Streets of Gadgetzan set.

Madam Goya's card effect is tricky to use and not reliable, but can be game-winning. The ideal outcome with Madam Goya is to target a low-cost minion and switch in a much stronger minion, preferably a minion with a strong end-of-turn effect like Y'Shaarj or ones with negative Battlecries like Deathwing. As a result, Madam Goya is best used in control decks with many high-cost minions. Since Paladins and Shamans can generate a minion with their Hero Powers, they possess the most convenient ways to generate targets for Madam Goya.

Madam Goya can also be used to return cards with strong Battlecries. However, using Madam Goya for this purpose is generally inferior to Youthful Brewmaster or Ancient Brewmaster since they can accomplish this more effectively while also having decent stats on their own.

Priests can use Madam Goya with temporary mind control effects to permanently take the minion for themselves.

Provides substantially more value with Brann Bronzebeard, which causes Madam Goya to summon two minions from your deck, but only shuffle in one.

Summon
Everyone has a price.

Attack
Your debt is due.

Madam Goya originally ran the Black Market Auction House at the Black Market on the Veiled Stair, which is to the north east of the Valley of the Four Winds in Pandaria. She accepts bids personally as she is distrustful of others.

After the events of Mists of Pandaria, she moved her operation to the Ring of Blood in Nagrand on Draenor. When Warlords of Draenor concluded she moved again, this time to the Underbelly in Dalaran at the Broken Isles.

Her bodyguard, Mister Chu is ever by her side, even when Marcus makes an appearance in A Steamy Romance Novel: Hot and Misty.

Goya likes to keep eyes and ears open near important people or places, and will go as far as to try to sneak a spy inside.

In Hearthstone lore, Madam Goya serves as the curator for the Gadgetzan Museum of Ancient Artifacts, as evidenced by both Volume 32 #9 and Volume 32 #10 page 2 of The Gadgetzan Gazette. In the former, she is mentioned as having promised to credit citizens who donate to the museum with a "nifty plaque", while the latter describes a short speech given by Goya to a throng of the opening gala's attendees: "It gives me the greatest pleasure to welcome the people of Gadgetzan to what is now surely the world's finest museum. This, of course, is only the beginning! Our ancient past conceals wonders untold, and I am confident that you will find our future exhibits to be most... thrilling."