This article is using {{Card template}}.
See Help:Style guide/Card for how to edit this kind of article.
Edit this article
Mad Summoner
52950 • DAL_751
Regular 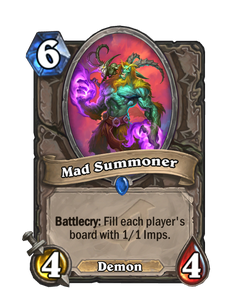 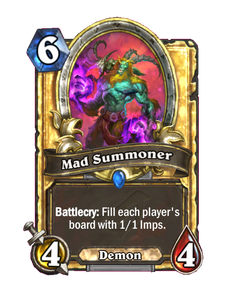 Does he summon because of his madness, or is he mad from all the summoning? 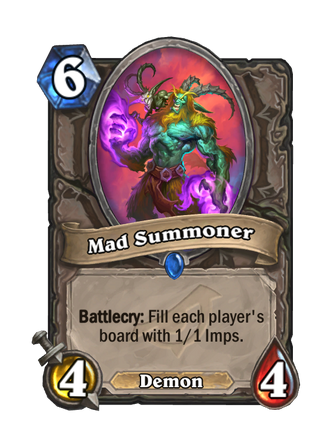 Mad Summoner is a rare neutral minion card, from the Rise of Shadows set. 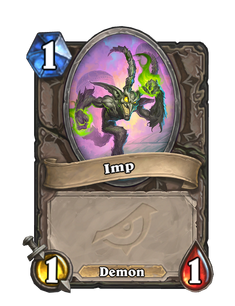 This minion has a huge Battlecry effect that benefits both players, so it's best followed up with a cheap enemy-only AoE spell like

Impferno. Without it, be very cautious of playing this if you expect the opponent to have AoE buff cards like

Power of the Wild or

Very effective at reducing the cost of

Jumbo Imp, or buffing the effects of

Frost Nova, you can temporarily block the opponent's board and prevent them from summoning minions as long as they have no method of destroying friendly minions.

This card is ideal for Gonk Druid decks as it is currently the only card that fills the opponent's board with weak minions, letting you easily rack up 7 attacks on the enemy's face with two copies of

Gonk, the Raptor in play.

Mad Summoner is a satyr.

Satyrs (sometimes pluralized as satyr) are a race of bestial demons usually sworn to the Burning Legion. They are created through the spreading of the ancient satyr curse, an affliction which originated with Xavius, a Highborne sorcerer who was destroyed and remade into a demonic form as a punishment for his failures by Sargeras during the War of the Ancients. Xavius soon began spreading his cursed form to other night elves and eventually to other races as well. In modern times, satyrs mostly live in various sects throughout Kalimdor and exist only to harry their hated night elf cousins and obey the will of the Legion, though others have instead sworn fealty to the Old Gods and work to spread the influence of the Emerald Nightmare.