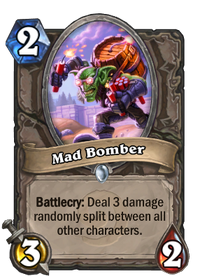 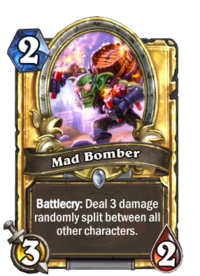 Battlecry: Deal 3 damage randomly split between all other characters.

Mad Bomber is a common neutral minion card, inducted into the Legacy set, formerly from the Classic set. 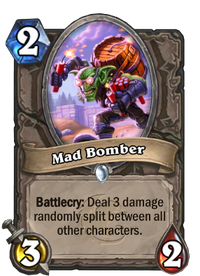 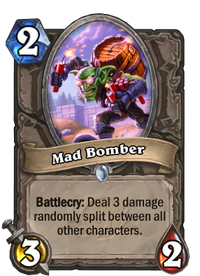 Mad Bomber can be obtained through Classic card packs, or through crafting.

This minion's effect shoots 3 missiles, each one dealing 1 damage to a randomly selected character (other than this minion):

Mad Bomber's Battlecry can be useful in damaging or destroying enemy minions, especially if they are low in health or numerous. It will also trigger Enrage effects, as well as the effects of cards like Acolyte of Pain or Grim Patron. Conversely, it is inadvisable to play this card when there is a high chance of hitting friendly minions that do not benefit from being damaged, or if there are enemy minions that do benefit from being damaged.

Wanna blow somethin' up? Ha-ha!
Attack
Oo-oo-yeah you got it!
Death
Yoooow!

Goblins are small humanoids, crafty and shrewd, bearing an overwhelming interest in commerce and a strong curiosity about mechanical things. Goblin society is fragmented, defined chiefly by commerce and trade. The ultimate schemers and con artists, goblins are always in search of a better deal. Despite their seemingly chaotic natures, they exist in a fairly strict and straightforward hierarchy. Other races universally view goblins as inventors, merchants and, without exception, maniacs. Goblins value technology as a useful aspect of commerce. Some say that their advantage — and their curse — is to be the primary users of technology in a world governed by magic. While dwarves and gnomes share a similar gift, goblin technology is more far-reaching and sinister and makes a larger impact on the natural world.

They employ vast teams of engineers who expand on current technology and produce gadgets to suit a wide array of applications. They constantly build and repair machines and work on new ideas. Unfortunately, goblins alternate passionate genius with wandering focus. Their lack of discipline means that many creations end up half finished as something else catches their attention. Goblin workmanship has a partially deserved reputation for unreliability, and a goblin device may explode simply because its creator forgot to add a vital release valve. Goblins are envious of the Ironforge dwarves’ invention of firearms, both from a commercial and a technological standpoint. Goblins recognize that firearms represent a new source of power, and he who controls the source controls the gold — which is, to goblins, the ultimate power. Fortunately for the rest of the world, goblin firearm experimentation suffers from the race’s normal laxity — and improperly tended gunpowder experiments continue to end the careers of many aspiring goblin tinkers. However, goblin ingenuity has paid off a few times; goblin gunpowder weapons tend to be inelegant and violently explosive (land mines, rockets and the like). 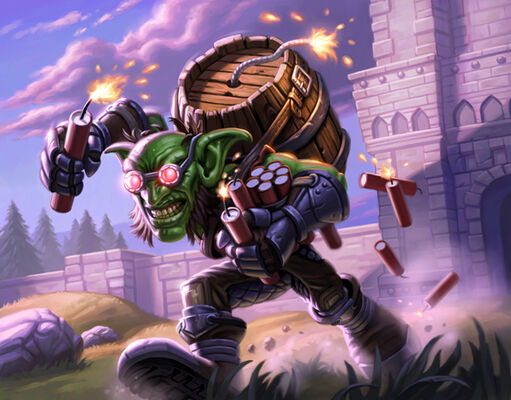