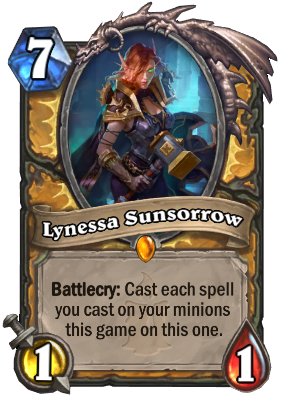 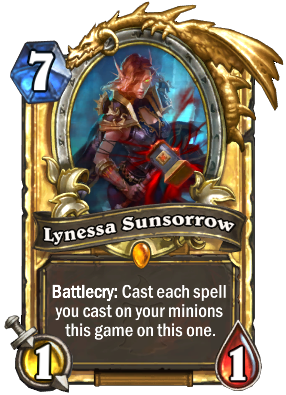 Elite
Battlecry: Cast each spell\nyou cast on your minions\n this game on this one.
Flavor text

A diet of pure magic is great for the complexion but wreaks havoc on one's mood.

Lynessa Sunsorrow is a legendary paladin minion card, from the Kobolds and Catacombs set.

Lynessa Sunsorrow can be obtained through Kobolds & Catacombs card packs, or through crafting.

Lynessa Sunsorrow is a late game oriented card. She will replay all spells used on ally minions, by a maximum of 30 casts per Battlecry.

If you are running a Deck with Lynessa, consider putting in some cards that benefit from spell buffs such as The Last Kaleidosaur, Shirvallah, the Tiger, or Immortal Prelate.

Remind that, Lynessa will not cast a replayed version, like the ones used by The Voraxx.

If you are running a deck with less spells, she can be played early, but less powerful. But even with a few buffs, she can become really powerful. Two Blessing of Kings and two Hand of A'dal are good enough, summoning a 7 cost 13/13.

She will cast her spells at a random order, so Dark Conviction or Dinosize are dangerous options, potentially wasting all stat buffs that had been replayed so far.

If obtained by Prismatic Lens, she can become an early strong minion, since most of the time, you will be playing a 5/5 1 cost card. But considering the risks, it is better to save her for the late game, except if you have a Getaway Kodo.

Never use Duel! when she is not in your hand. The risk is far too dangerous.

Lynessa will cast every spell at random order, to a maximum of 30 spells; so, even when getting high stats, the triggering part will always change and the cast order will be ignored. But, one thing that is guaranteed is that she will cast one spell by each single cast. So if you manage to play 4 repeated spells on your minions, when summoned, she will replay all 4 casts.

She can not reactivate Secrets, buffs from Weapons or minions.

Neutral Spells like Lantern of Power or Nightmare are applied normally.

Her Battlecry creates unique effects. Below here, will be a small list of interactions with her:

Adaptation: Lynessa will adapt randomly. She can cast the same option twice.

Shield of Honor: She gains both of the buffs without being Damaged.

Sound the Bells!: The first bell and the Echo bells will be re-cast.

Libram of Wisdom: All casts will be considered unique spells for her Battlecry, in other words, she will retain every single one of the Librams that were used, along with the Deathrattle.

Rampage: Works the same way as Shield of Honor

Bestial Wrath: Gives her Immunity, despite not being able to use it under normal situations

Dire Frenzy: The spell will be applied despite Lynessa not being a Beast

Explorer's Hat: Works the same way as Libram of Wisdom

The Beast Within: Activates normaly

Attack
The Light is mine!

Lynessa is unique to Hearthstone. She is a former Blood Knight who left the order, disgusted, after they stopped draining power from the naaru, as she felt that the elves had grown weak and that drawing from the Sunwell couldn't give her the power she truly sought. Now starving for magic, she has ventured to the catacombs, a repository of ancient energy. As she explores, she drains the magic from the air, feasting for the first time since she left Silvermoon City.[6]

She shares her last name with Ambassador Sunsorrow, the blood elven ambassador to the Forsaken of the Undercity, but it's unknown if the two are related.