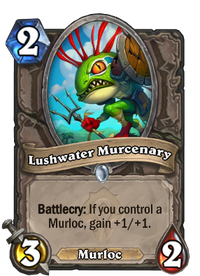 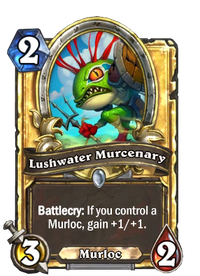 You can't just switch sides because they have more fish!

Lushwater Murcenary is a common neutral minion card, from the Forged in the Barrens set.

Lushwater Murcenary can be obtained through Forged in the Barrens card packs, through crafting, or as an Arena reward.

On it's own, Lushwater Murcenary is essentially just a Puddlestomper. With its effect active, this murloc is a very strong turn 2 play. Played on a curve with a 1-cost murloc played the turn before, such as Murloc Tidecaller or Imprisoned Sungill, this minion has excellent stats for the cost.

Lushwater Oasis, just south of the Crossroads, is one of three major oases in the Northern Barrens. It is notable for containing the entrance to the accursed Wailing Caverns.