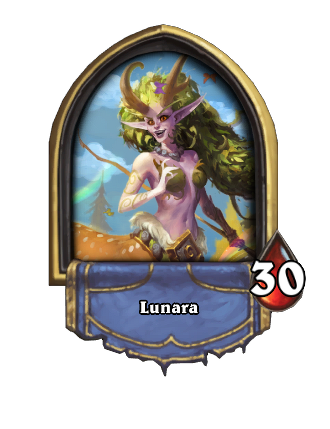 Lunara is a hero skin for the druid class.

Lunara is the eldest daughter of the demi-god Cenarius. While her sisters, the dryads, embody peace and the serene beauty of nature, Lunara’s apple didn’t fall far from her father’s tree—she’s a relentless defender of the wilderness and immortal proof that nature is red in claw and thorn. When your dad is a demi-god, and your grandparents are the goddess of the Moon and a god of the Wild, you’ve got a reputation to uphold. Lunara is more than up to the task.[1]

Lunara is a dryad located in the Dreamgrove in Val'sharah. She first appeared as a playable character in Heroes of the Storm, before being introduced in World of Warcraft: Legion and then in Hearthstone.

Lunara is currently available for obtaining. 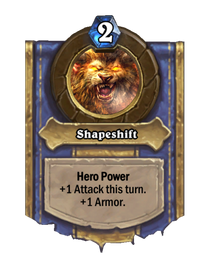 Once unlocked and selected for use, Lunara replaces Malfurion Stormrage whenever the player uses a Druid deck, as well as:

When viewed in the Collection, Lunara has the following flavor text:

The first daughter of Cenarius: fierce defender of nature and natural hair-care products. Obtained during the launch of the Year of the Raven.