This article is using {{Card template}}.
See Help:Style guide/Card for how to edit this kind of article.
Edit this article
Lunar Visions
40615 • CFM_811
Regular 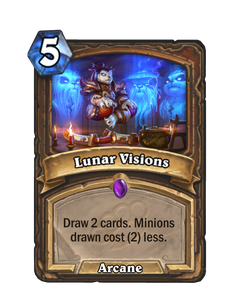 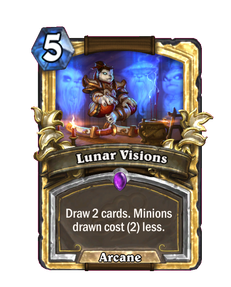 The true mystery of lunar visions is how there is nothing to watch when there are so many channels. 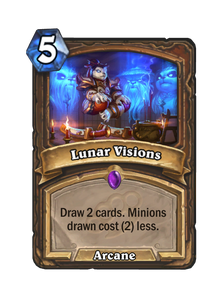 Lunar Visions is an epic druid spell card, from the Mean Streets of Gadgetzan set.

This card has the same effect as Arcane Intellect, but costs 2 mana more. However, that is compensated for by the cost reduction. Depending on the cards drawn, you can get a total discount of up to 4 mana. This makes this card a strong choice for decks that feature mostly minions.

In a deck centered around spells and/or weapons, the chance of getting a discount on the cards drawn is too low for this card to be included.