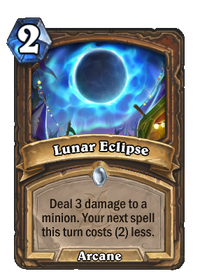 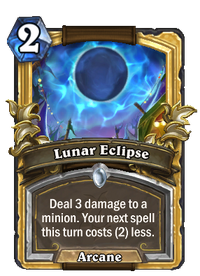 Deal 3 damage to a minion. Your next spell this turn costs (2) less.

When the Azeroth is between the Sun and the Moon.

Lunar Eclipse is a common druid spell card, from the Madness at the Darkmoon Faire set.

Lunar Eclipse can be obtained through Madness at the Darkmoon Faire card packs, through crafting, or as an Arena reward. 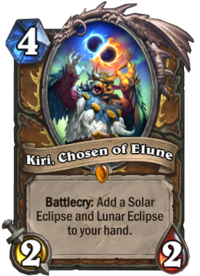 Lunar Eclipse fits best in a Druid deck that can reliably make use of its cost-reducing effect. It can effectively deal 3 damage for no mana if you follow up with a spell, which can be good for gaining tempo in a Token Druid or keeping faster decks at bay while you play ramp cards in Ramp Druid. Minions whose abilities synergize with your spells can benefit from Lunar Eclipse greatly, especially if your deck would otherwise have too many expensive spells to abuse their effects. Even if your deck isn't too spell-heavy, however, Lunar Eclipse can still be a decent early game removal option.

If played after Solar Eclipse, Lunar Eclipse will deal 6 damage and discount your next spell by 4 mana. Provided you have an expensive enough spell to follow up with, this is capable of removing a mid-sized minion for effectively 0 mana. If played before Solar Eclipse, you can remove a smaller minion in addition to doubling your next spell this turn for only 2 mana. Using these cards together sacrifices card advantage, but Druid has plenty of card draw options to help make up for this.

There is 1 achievement related to Lunar Eclipse.

Lunar Eclipse and Solar Eclipse are based on the Eclipse bar, a secondary resource for Balance druids that would cycle between Lunar and Solar, boosting the damage of their arcane or nature spells respectively. It was removed from the game in Legion.