This article is using {{Card template}}.
See Help:Style guide/Card for how to edit this kind of article.
Edit this article
Luckydo Buccaneer
40791 • CFM_342
Regular 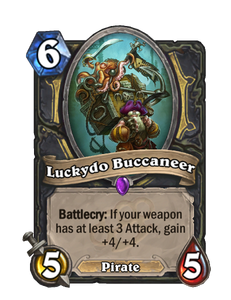 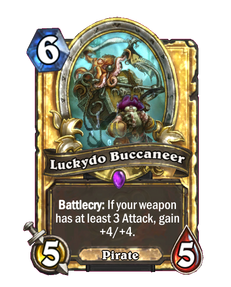 You can't just leave a Luckydo somewhere. You gotta keep 'em with you! Especially in Gadgetzan! 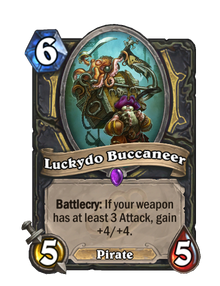 Luckydo Buccaneer is an epic rogue minion card, from the Mean Streets of Gadgetzan set.

Luckydo Buccaneer is obviously a powerful minion if its Battlecry triggers.

The easiest way to do this is with weapon-buffing cards like Southsea Squidface and Deadly Poison, or by making use of Deadly Fork's Deathrattle.

Luckydo Buccaneer can also be played on curve after Assassin's Blade. or by using weapons that are 4 mana or below before playing it such as upgraded Kingsbane, Necrium Blade, Obsidian Shard, Hooked Scimitar, or Shadowblade .

Being a Pirate, Luckydo Buccaneer benefits from and contributes to any Pirate synergies. However, the existence of Golakka Crawler and the fact that Rogue doesn't need such big minions (Edwin VanCleef excluded) and its 6 mana makes it difficult to be used in Rogue Decks.

Summon
Lookin' for me carried treasure?

Attack
Get your own!

The grummles are the humble wanderers of the mountains of Pandaria. They make good guides and can carry many times their own weight. They have a trade route that stretches across the zone called the Burlap Trail, which they will need players' help with as this is very dangerous area. The grummles regularly trade with the pandaren, bringing essential supplies to the Shado-Pan forces guarding the great Serpent's Spine wall, and for a happy-go-lucky people they take this task quite seriously. Such trade endeavors were established long ago, and have forged one of the strongest ties possible between two sapient species on Pandaria.

Today they still act as traders, messengers, guides, and pack bearers for expeditions high up on Kun-Lai Summit. In addition to their great knowledge of the mountains, the superstitious grummles rely on luck and good fortune to see them through the difficult high passes. They are a very superstitious people, who often take on the names of their favorite charms, or "Luckydos." The grummles are suspicious of any luck they cannot smell.

As explained by Lucky Eightcoins, Brother Oilyak, and Lorewalker Cho, and implied elsewhere, a key component in grummle culture is the "luckydo". A luckydo is a lucky object that a grummle carries at all times. Pungency is a key factor in determining an object's luck. A grummle is usually named after their primary luckydo. The highest honor for a grummle is to be declared a luckydo themselves. Per Cousin Gootfur, the opposite of a luckydo is a luckydont.

Notably, the Luckydo Buccaneer is the first known example of a grummle pirate, or indeed a grummle with any affinity for the sea at all.