This article is using {{Card template}}.
See Help:Style guide/Card for how to edit this kind of article.
Edit this article
Lucentbark
51795 • DAL_357
Regular 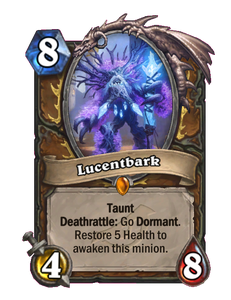 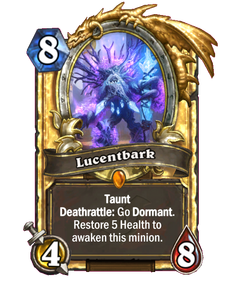 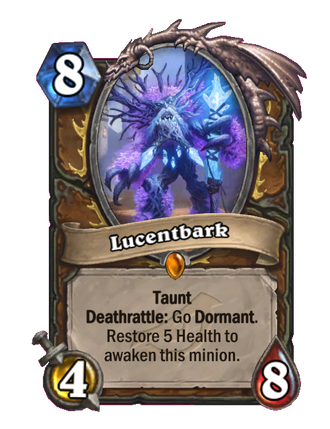 Lucentbark is a legendary druid minion card, from the Rise of Shadows set. 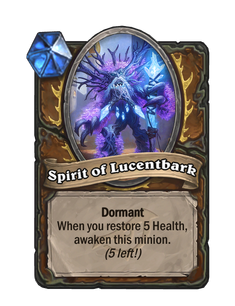 While an okay minion on its own, Lucentbark works incredibly well with healing effects, turning what is normally a slow play into tempo by summoning a 4/8 with Taunt for free. Some good sources of healing for Druid are

If you're not running consistent healing effects, you're better off playing

Ironbark Protector, which has +4 Attack over Lucentbark, or

Primordial Drake (in Wild), which has a useful Battlecry.

Lucentbark is even more potent if he can be copied, as they will all be revived once the healing threshold is met.

Flobbidinous Floop are good additions to decks that run Lucentbark.

Lucentbark is unique to Hearthstone. He is a wise, powerful, and resolute

Ancient of Lore[1] hailing from Crystalsong Forest. While he may look grumpy, the small woodland creatures that inhabit his forest (and even his own branches at times) always brings a smile to his face. He is quite friendly toward Dalaran and so immediately comes to its aid to drive out the invaders.[2]