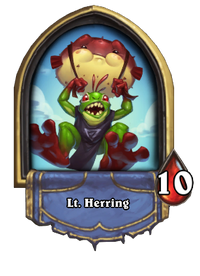 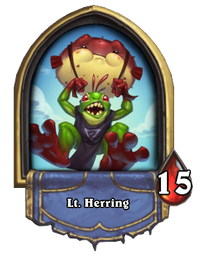 Leads the dreaded E.V.I.L. Puffertroopers, AKA "The Flying Fish."

Lt. Herring is a boss that can be encountered initially in Chapter 1 of Tombs of Terror. After completing Chapter 1, this boss encounter will be available in any completed chapter.

Lt. Herring's deck in Normal mode consists of pretty weak murlocs, which is slightly compensated by their low cost. There is almost no synergy between them, so they do not pose a big threat, and it's not difficult to clear the board and deal damage to Lt. Herring at the same time. Anyway, the most effective tools at this early stage are Arcane Craftiness and fatigue damage via Siltfin Spiritwalker.

Lt. Herring's heroic deck is identical to ranked Murloc Paladin and Murloc Shaman, so you must kill the enemy's murlocs, otherwise they will easily defeat you due to the synergy (mainly Murloc Tidecaller and Coldlight Seer) or murlocs generated by Underbelly Angler.

The only case when idle will not be fatal is Addarah in your starting hand. Also you can win without trading if your deck is based on Truesilver Lance - a weapon that can kill Lt. Herring on turn 4-6 while your minions can be lure or traders either.

If you encounter this boss at level 2, the following passives will be the most useful - Captured Flag, Disks of Swiftness, First Aid Kit, Glyph of Warding and Rocket Backpacks.

Lt. Herring
...!
Sir Finley
What are those parachutes? Preposterous!

Lt. Herring is unique to Hearthstone. He is a member of League of E.V.I.L.