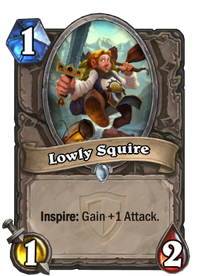 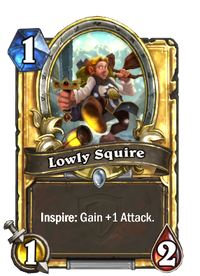 But not the lowliest!

Lowly Squire is a common neutral minion card, from the Grand Tournament set.

Lowly Squire can be obtained through The Grand Tournament card packs, or through crafting.

Lowly Squire is a great early game minion in Inspire decks. If not dealt with early, he can gain substantial Attack and trade with much stronger minions or pressure the opponent's hero.

Like a lot of Inspire cards, Lowly Squire is significantly more powerful for Demon Hunters thanks to Demon Claws only costing 1 mana. This is a good inclusion for Aggro Demon Hunter, essentially being a 3rd and 4th copy of Battlefiend (excluding synergy with weapons and cards like Twin Slice).

Summon
One day I'll be a real knight.

A squire was the shield bearer or armour bearer of a knight, and at times squires included a knight's errand runner or servant. Use of the term has evolved over time. In the Middle Ages, squires were trainees to a knight but later a leader in an English village or Lord of the Manor might be called a squire, and later key public figures such as justice of the peace or Member of Parliament. In contemporary American usage as well, squire is the title given to Justice of the peace or similar local dignitaries.

Squire is a shortened version of the word Esquire, from the Old French escuier (modern French écuyer), itself derived from the Late Latin scutarius ("shield bearer"), in medieval or Old English a scutifer. The Classical Latin equivalent was armiger, "arms bearer".

The most common definition of 'squire' is that to which refers to the medieval times. A squire would be a teenage boy, in his training to become a knight. A boy became a squire at the age of 14. This was the second stage to becoming a knight, after serving first as a page. As part of his development to that end, he served an existing knight as an attendant or shield carrier, doing simple but important tasks like saddling a horse or caring for the knight's weapons and armour. The squire would sometimes carry the knight's flag to battle with his master.

But a squire did not stay a squire forever. A knight would take his squires (a knight could have multiple squires but a squire could only have one knight) into battle with him and that was a squire's chance to prove himself. If he proved his loyalty and skill in battle, he would have a dubbing, an official ceremony to become a knight. However, during the Middle Ages the rank of the squire came to be recognized in its own right, and once knighthood ceased to be conferred by any but the monarch, it was no longer to be assumed that a squire would in due course progress to be a knight. The connection between a squire and any particular knight also ceased to exist, as did any shield-carrying duties. 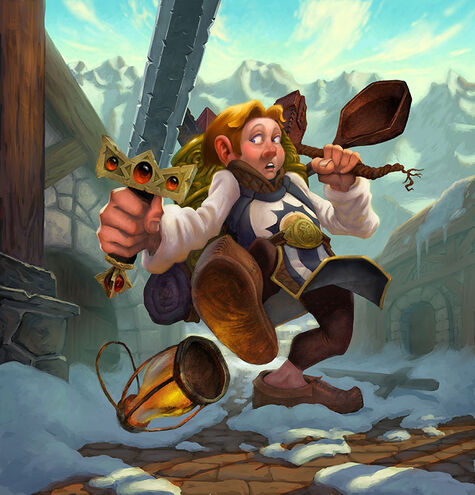