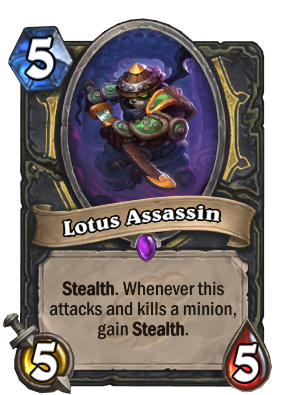 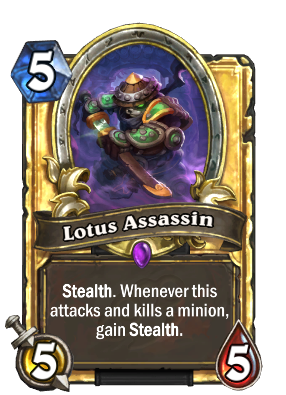 For 5000g, you can just give the Jade Lotus any name and they will assassinate and/or embarrass them.

Lotus Assassin is an epic rogue minion card, from the Mean Streets of Gadgetzan set.

Lotus Assassin can be obtained through Mean Streets of Gadgetzan card packs, or through crafting.

It can be a better Stranglethorn Tiger sometimes, and benefits from Shadow Sensei quite well. Outside of this combo this card can destroy high- Attack minions and still be resistant to direct spells.

Keep in mind that the main counter for this card is AoE, such as Dragonfire Potion and Felfire Potion, or even Maelstrom Portal, combined with Spell Damage.

Summon
None see the Lotus.