This article is using {{Card template}}.
See Help:Style guide/Card for how to edit this kind of article.
Edit this article
Lorewalker Cho
1135 • EX1_100
Regular 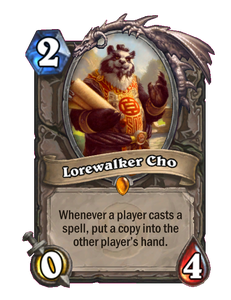 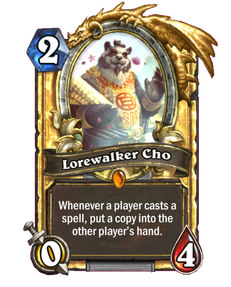 Dimensions: Full • 330 x 410px
Elite
Whenever a player casts a spell, put a copy into the other player’s hand.
Flavor text

Lorewalker Cho archives and shares tales from the land of Pandaria, but his favorite story is the one where Joey and Phoebe go on a road trip. 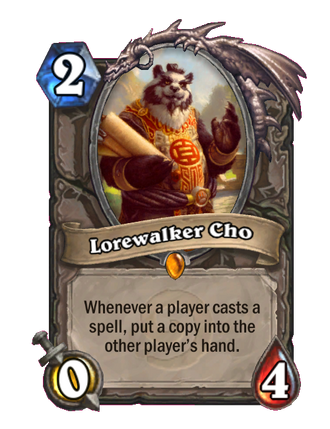 For the tutorial boss of the same name, see Lorewalker Cho

Lorewalker Cho is a legendary minion card, inducted into the Legacy set, formerly from the Classic set. 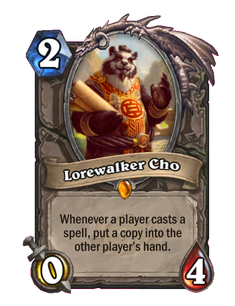 Play Lorewalker Cho to prevent your enemy from using spells against you, or just give them a taste of their own medicine. Most effective against spell-heavy decks.

As a fairly vulnerable minion, ideally keep Cho well-defended to prevent your opponent from swiftly destroying him.

Players playing against Cho may wish to use minions to defeat him, before then casting any planned spells. If doing so is not possible immediately, it may still be better to delay casting spells until he is defeated. Alternatively, use a single spell such as

Fireball to quickly dispatch him, and suffer the consequence of supplying that single card to your enemy.

You could also play Cho right after playing

Millhouse Manastorm which will result in your opponent's spells costing 0 mana as normal, but if the opponent plays any of the free spells, it will result in you getting them as well. Note that the 0-mana effect will not be copied for you, though.

Another potential use of Cho would be against a deck that relies on Secrets. When your opponent plays a Secret, you will receive a copy of it and will therefore know which Secret the opponent played, making it much easier to play around.

While not the strongest card in regular play due to his hampering effect, Lorewalker Cho is a key card for use in technical and experimental play, allowing players to quickly generate endless copies of specific cards. Cho is commonly used by players when attempting to achieve outlandish effects, such as the repeated use of

Divine Spirit to create minions with more than 2 billion Health.

If multiple Cho minions are on the board, each Cho will generate one copy of every spell cast. These extra copies can result in both players having their hands filled with spells and unable to draw new cards.

The following quotes were used prior to Patch 2.0.0.7234, originally taken from the tutorial's Lorewalker Cho encounter.

Summon
Show me what you've learned.