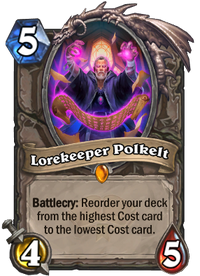 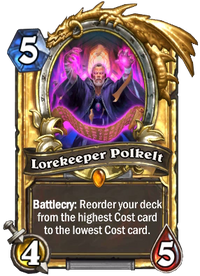 Lorekeeper Polkelt is a legendary neutral minion card, from the Scholomance Academy set.

Lorekeeper Polkelt can be obtained through Scholomance Academy card packs, through crafting, or as an Arena reward.

A great card to be able to draw your powerful minions in your deck more reliably instead of drawing low cost cards late in the game.

In Wild, using Lorekeeper Polkelt with Holy Wrath in hand to be able to do up to 25 damage to the enemy hero with drawn cards like Shirvallah, the Tiger and Molten Giant especially even better on curve or be able to draw Aviana, Kun, or your other combo pieces more reliably.

Polkelt is particularly strong with Galakrond, the Nightmare in Rogue decks and Skull of Gul'dan in Demon Hunter decks, guaranteeing discounts on the highest-value items. This is true to a lesser extent with cards such as Utgarde Grapplesniper and Tentacled Menace, though the latter cards are much less consistent as they depend on you having Polkelt active to work well.

In World of Warcraft, Lorekeeper Polkelt is a level 43 elite zombie mini-boss found in the Scholomance.

Polkelt is one of the six mini-bosses that are required to call forth Darkmaster Gandling. Polkelt is notable among them in that he is the only one of the six that does not drop a Corruptor's Scourgestone. As we can tell from his name, he was once the keeper of knowledge, knowledge that has sadly been lost, however, as he is now a shambling, unintelligent monster.