This article is using {{Card template}}.
See Help:Style guide/Card for how to edit this kind of article.
Edit this article
Lord Marrowgar
42448 • ICCA06_001
Regular 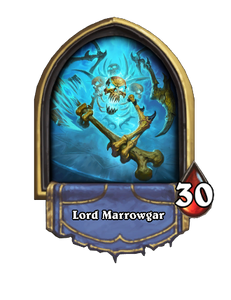 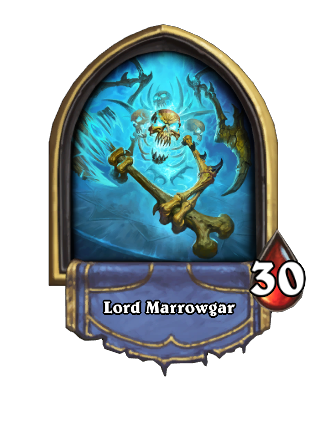 Lord Marrowgar is a boss found in the Knights of the Frozen Throne mission. He is the first boss of the mission's Lower Citadel wing. 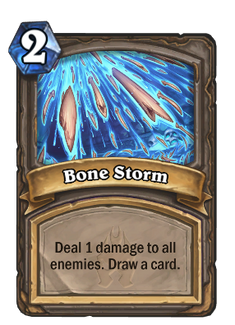 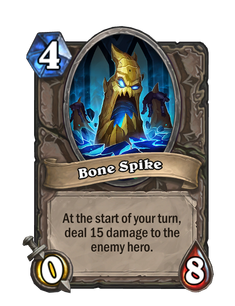 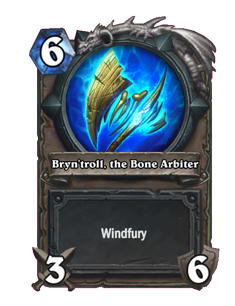 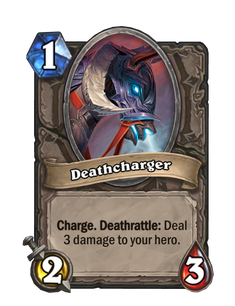 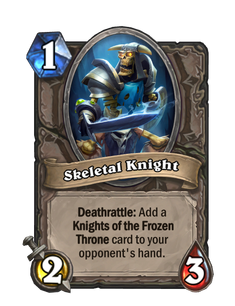 Since this boss can heal back to full HP at no cost, it is not ideal to push for face damage at the start. Instead, focus on building up your side of the board, until you have sufficient damage to kill Lord Marrowgar in a single turn.

Lord Marrowgar's most dangerous cards are the Bone Spikes. They deal a massive amount of damage and have enough Health to have a good chance to survive until the next turn. Destroy or silence them as soon as possible, and maybe use

Frozen Clone. His weapon, Bryn'troll, the Bone Arbiter, is very effective at removal, so having weapon removal cards like

Priest is an easy class for this mission. They have access to Silence effects and

Topsy Turvy to pacify the Bone Spikes, can set up a one-turn-kill combo with

With the introduction of

Auchenai Soulpriest to Marrowgar, making him commit suicide with his Hero Power at the end of his turn (as long as you do not have a 5+ Attack minion that he can trade his new Soulpriest into);

Gilded Gargoyle can help execute this combo as a one-turn kill on turn 10, while

Emperor Thaurissan allows it to come down on turn 9.

The Lich King
Icecrown Citadel! A collection of my most hideous minions, crafted not with dust... but with HATE.

The Lich King
I built this hideous bone amalgamation from the grisly remains of my duplicate cards.

Lord Marrowgar
None may enter the master's sanctum.

Lord Marrowgar
You fool, I have no ears!

Lord Marrowgar
It is time to reap.
Meat and sinew peel away before my caress.
So dangerous. So delightful!
The master will have you.
The only escape is death!

Lord Marrowgar
The master's rage courses through me!!

Lord Marrowgar
Hah hah, now I have your soulpriest. Wait. No. Go away! Shoo!

She licked me – that dragon licked me!

Lord Marrowgar
Ashes to ashes...
The Lich King
I must craft a NEW bone amalgamation. Maybe a golden one.

The Lich King
In the end, all will serve me.

Lord Marrowgar is the first boss of the Icecrown Citadel raid. Pieced together by the

The Lich King from the bones of a thousand vanquished adventurers, he is the guardian of the Frozen Throne within The Spire, and wields the power of the throne itself. His weapon is the axe Bryntroll, the Bone Arbiter.