Hearthstone Wiki
Register
Don't have an account?
Sign In
Advertisement
in: All cards, Wild format cards, Pages with no result queries, Eredar

This article is using {{Card template}}.
See Help:Style guide/Card for how to edit this kind of article.
Edit this article
Lord Jaraxxus
777 • EX1_323
Regular 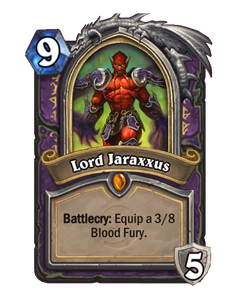 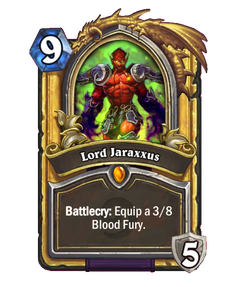 "TRIFLING GNOME! YOUR ARROGANCE WILL BE YOUR UNDOING!!!!" 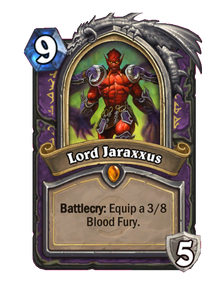 Lord Jaraxxus is a legendary warlock hero card, inducted into the Legacy set, formerly a minion card from the Classic set. 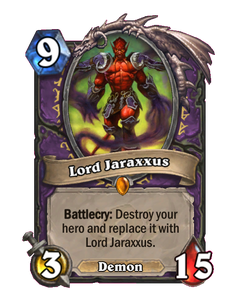 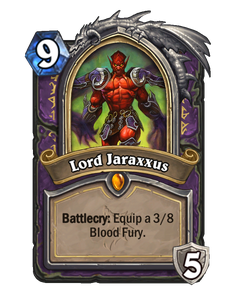 Regular Lord Jaraxxus is obtained for raising warlock to level 10.

Lord Jaraxxus (Core) is uncraftable and cannot be crafted or disenchanted. 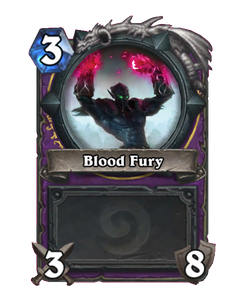 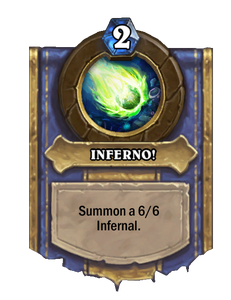 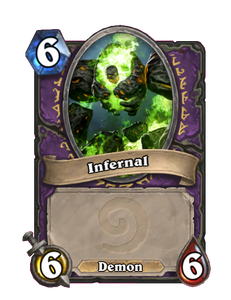 It was possible with the Classic version (but not the newer Core version) to force an enemy to become Jaraxxus.

This could be done by using playing Sylvanas Windrunner, reducing her to 1 health, using Treachery to give them to the opponent, and then killing her as Jaraxxus is summoned and temporarily in a minion state, through a means such as Knife Jugglers. This caused the enemy to take control of Jaraxxus before the battlecry took effect, and benefit from it instead.[1]

This was previously used to kill enemy heroes directly by casting Sacrificial Pact on them before it was nerfed to only apply to friendly demons. After the patch, the only way for this to work is through the indirect offense: force the enemy into casting the spell through means like using Lorewalker Cho to give it to them and Unseen Saboteur to randomly select it.

Lord Jaraxxus is an eredar lord of the Burning Legion and the second encounter of the Trial of the Crusader raid instance. Lord Jaraxxus is accidentally summoned by Grand Warlock Wilfred Fizzlebang when the gnome attempts to summon a doomguard for the next challenge. Jaraxxus kills Fizzlebang for his efforts.

In Hearthstone lore, Lord Jaraxxus would later become mechanically augmented by Dr. Boom as Mecha-Jaraxxus with The Boomsday Project, although how and why this happened is unknown. Later, he goes to command the Rusted Legion in the Trial by Felfire adventure, but he's stopped by Illidan Stormrage and Aranna Starseeker.

As a minion card[]