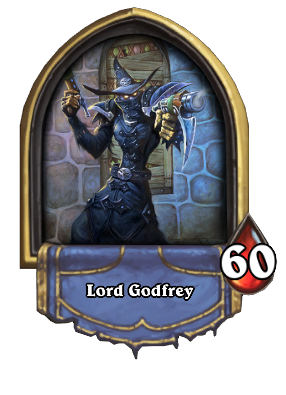 The Lord of Shadowfang Keep has a bullet to pick with Crowley.

For the minion card of the same name, see Lord Godfrey.

Lord Godfrey is the Final Nemesis of Darius Crowley that is encountered at the end of the Monster Hunt. 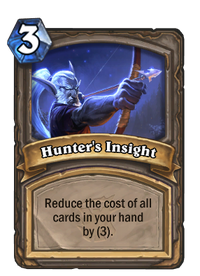 Godfrey plays a Deathrattle themed Hunter deck, designed to take advantage of Darius's Hero Power. He has an opening card that reduces the cost of his cards by 3, allowing him to get a big jump on you. He also starts at three mana. A lot of his minions, like Acolyte of Pain or Gahz'rilla, get an advantage when taking damage, so it's best to try and kill them in one turn or as few hits as possible. Even though it may seem attractive to chip away at his Bittertide Hydra to get a lot of damage on him, the Hydra can still hit for large amounts of damage, so it too should be killed quickly. You want to have many minions with Rush or other high offensive capabilities. You can usually get decent damage on him mid game but he starts swarming later which can cause a very big problem.

His Hero Power can clear off up to three minions at once, so it's more advantageous to keep a few healthy minions than multiple damaged ones. You can also use your cannons to deliberately separate your minions so they are not subject to splash damage. Bear in mind that his Hero Power cannot kill a full-health Grim Patron in one shot, so positioning a Grim Patron next to a minion likely to be targeted by that Hero Power can leave you with little net loss in field advantage.

Hagatha the Witch
Godfrey! We had an agreement. This one is yours.

Darius Crowley
Godfrey you traitor! It's time to pay.
Lord Godfrey
You're one to talk about loyalty, Crowley.
Your journey ends in agony!

Lord Godfrey
I told Greymane to leave you rotting in prison, Crowley.
Darius Crowley
You were rotten even before you died, Godfrey.

Lord Godfrey
You brought a cannon to a gun fight? Who's the coward?

Hero power (if kills a minion)

Lord Godfrey
Ahhahaha.
Ahaha! To watch the world burn.
I forgot how good this feels!
If only I could do this to every last worgen!
This really brings me back.

I've got a few tricks up my sleeve.
Draw!

Bullseye!
What? It was a mercy killing.