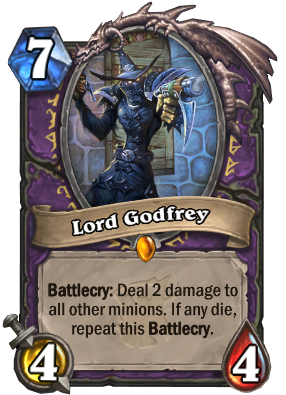 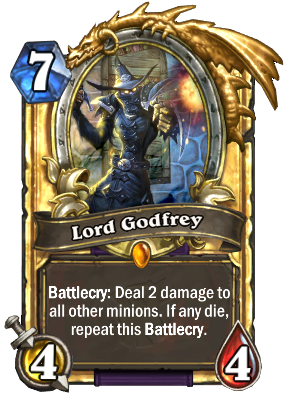 Battlecry: Deal 2 damage to all other minions. If any die, repeat this Battlecry.
Flavor text

Betrayed the Alliance. Betrayed the Horde. All for 200 achievement points and a sweet, sweet hat.

For the boss of the same name, see Lord Godfrey (boss)

Lord Godfrey is a legendary warlock minion card, from the The Witchwood set.

Lord Godfrey can be obtained through The Witchwood card packs, or through crafting.

Lord Godfrey is an extremely powerful card for getting, or maintaining, board control. If he kills just one minion, you get the effect of a Flamestrike with the addition of having a 4/4 on the board. He can also be used to proc your minions' deathrattles en masse, but caution must be used if you are dropping him on a board where you have valuable minions, as they are also going to die. A well-timed Godfrey will clear the board without any effort.

Lord Vincent Godfrey is a renegade nobleman from Gilneas who opposed his king, Genn Greymane, after discovering that Genn and many of his people had been afflicted with the worgen curse. After committing suicide rather than acknowledge a worgen as his lord, Godfrey's body was recovered and reanimated by the Forsaken, but after turning on them as well, he fled into the abandoned ruins of Shadowfang Keep, where he and his followers remain.

Even while still among the living, Lord Godfrey had a penchant for cold-blooded self-interest and treachery: he devastated Lord Darius Crowley by political maneuvering, probably instigating a rebellion in the process. Then, while Gilneas itself was under siege, he betrayed King Greymane. After Godfrey’s untimely demise, the Dark Lady Sylvanas resurrected him among her undead Forsaken, but expecting anything resembling loyalty from a creature like Godfrey is always a deadly mistake. He betrayed her as well, then fled to an abandoned keep to continue doing what he does best: pursuing his own interests.

Precisely what those interests might be remains a mystery, but it seems that Godfrey has chosen this moment to act. Since the curse descended on the Witchwood, he left the seclusion of the keep he’s haunted for years, and has recently been sighted near the city. It’s not clear what he’s planning—or what he hopes to gain—but devastation tends to follow whereever Godfrey treads.[1]