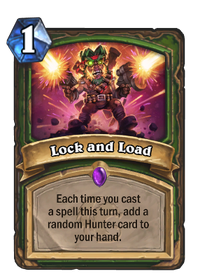 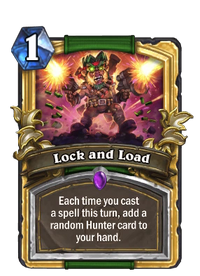 Each time you cast a spell this turn, add a random Hunter card to your hand.
Flavor text

Rexxar narrowed his eyes, grabbed his machine gun, and said: "It's go time. Lock and load."

This card pays homage to that special moment.

This is the Core set version of Lock and Load, an epic hunter spell card, originally from The Grand Tournament set.

For more information about Lock and Load, see the original version. 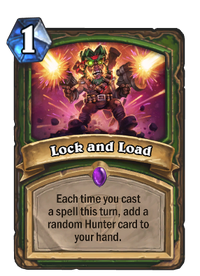 Two copies of regular Lock and Load (Core) are obtained for raising hunter to level 9.

Two copies of golden Lock and Load (Core) are obtained for winning 250 games as hunter.

Lock and Load (Core) is uncraftable and cannot be crafted or disenchanted.