This article is using {{Card template}}.
See Help:Style guide/Card for how to edit this kind of article.
Edit this article
Lock and Load
2484 • AT_061
Regular 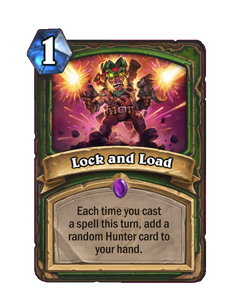 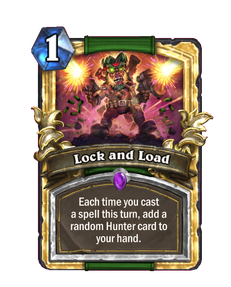 Dimensions: Full • 330 x 410px
Each time you cast a spell this turn, add a random Hunter card to your hand.
Flavor text

Rexxar narrowed his eyes, grabbed his machine gun, and said: "It's go time. Lock and load."
This card pays homage to that special moment. 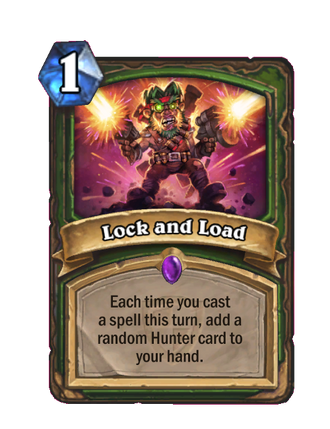 Lock and Load is an epic hunter spell card, from the Grand Tournament set.

Lock and Load is a strong card generating deck for spell-focused Hunter decks. Using it in with combination of cheap spells like

Rapid Fire, and various Secrets will help it make it worth its cost. It helps empower

Zul'jin's Battlecry, adding more spells to be cast beyond what you've included in your deck.

The following text describes the World of Warcraft spell Lock and Load as it existed prior to the creation of the Hearthstone card. For the latest version, see Lock and Load.

Lock and Load is a passive specialization ability for Survival hunters, available at level 43. When it activates, it allows the hunter's next two

Explosive Shot to be fired with no cooldown (though it still invokes the global cooldown), and no focus cost.