This article is using {{Card template}}.
See Help:Style guide/Card for how to edit this kind of article.
Edit this article
Loatheb
1914 • FP1_030
Regular 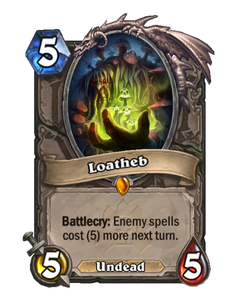 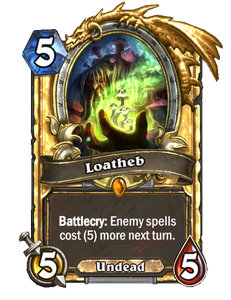 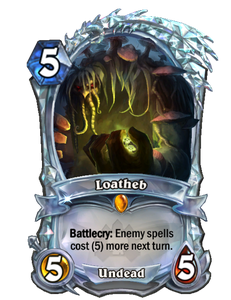 Loatheb used to be a simple Bog Beast. This is why we need stricter regulations on mining and agriculture. 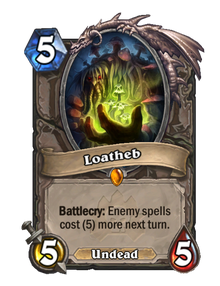 For the boss of the same name, see Loatheb.

Loatheb is a legendary neutral minion card, from the Naxxramas set.

Loatheb is useful for protecting the minions on your board from being removed by spells, like Flamestrike or Starfall. At the very least, it makes spells a costly option for your opponent to use and limits their ability to play other cards after spending extra mana on a single spell.

If you can anticipate your opponent's plan to win next turn, Loatheb can be used to halt finishing combos that are spell dependent, such as Savage Roar, Pyroblast, or Power Overwhelming. This will allow you to live at least one turn longer in an attempt to turn things around as well as providing a decent-sized 5/5 body to your side of the board.

With its powerful effect and threatening stats, Loatheb is a natural fit in most decks based around Baku the Mooneater, as well as Highlander decks.

Loatheb was a raid boss in the Naxxramas raid. Every 20 seconds he would use the Necrotic Aura ability to reduce all healing received by 100% for 17 seconds, presenting healers with a 3-second window every 20 seconds in which to heal the party. This dynamic is reflected in his Hearthstone incarnation's Battlecry, inhibiting enemy spell-casting of all kinds.[7]

A prime example of how the plague manifested in the local flora and fauna is the twisted Fen Creeper Loatheb. In a twisted mockery of the plant kingdom’s natural ability to regenerate, Loatheb can summon deadly spores that quickly spread a sickening miasma that turns magical healing arts against those who wield them.[8]

"Loatheb. The hideous result of fusing the living plague of the Plaguelands with the bog beasts of Azeroth, Loatheb is said to control the power of healing itself."
- Commander Eligor Dawnbringer

Loatheb was originally designed as a 6 Mana 4/8 minion with the effect "Health can't be restored."[9]