This article is using {{Card template}}.
See Help:Style guide/Card for how to edit this kind of article.
Edit this article
Living Mana
41094 • UNG_111
Regular 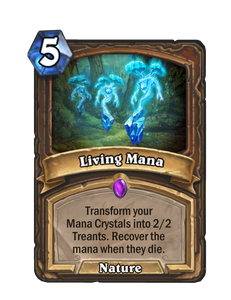 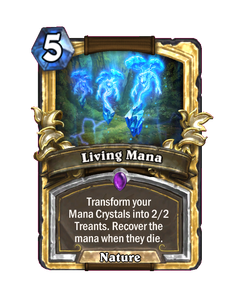 If you truly love your mana, set it free. 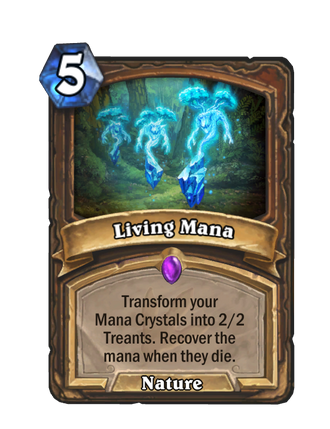 Living Mana is an epic druid spell card, from the Journey to Un'Goro set. 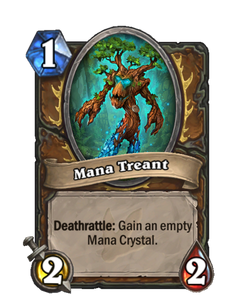 Living Mana serves as a strong, albeit risky, card to play as a finisher in token-based aggro decks, generating multiple bodies on the player's side of the board. If they are not removed, it can then be followed up with AoE buffs like

Mark of the Lotus and

Savage Roar to gain a huge damage boost. Its effect has a similar consequence to Overload, depriving the player of one mana per

Mana Treant that remains (not including the mana crystal gained per turn), but the loss of mana crystals is not a huge drawback for aggro decks that are aiming to win the game at this stage of the game, as they will be running low on cards regardless. If the Treants do get destroyed, they will regain the mana crystals they've used to compensate.

However, since Mana Treants give an empty mana crystal via Deathrattle, this makes them vulnerable to silence or transform effects. A

Psychic Scream will make it very difficult for the player to make a comeback, enough to secure a loss on their end. If in case your Mana Treants did get transformed or silenced, it's possible to make a speedy recovery using

Pilfered Power, if you have enough mana to cast it. If you're using the Mana Treants to trade, then

Floop's Glorious Gloop will help you compensate for the lost mana crystals.

Since the Mana Treants count as Treants, they are very useful in reducing the cost of

Spiritsinger Umbra, filling your board with Mana Treants and instantly regain any mana crystal you would've lost. Playing both cards takes 9 Mana, but if this combo can be played earlier, it will result in a net gain of mana crystals.

This card was pitched by Mike Donais and is based on the Magic: The Gathering card Living Lands. Jokingly, it was first written with the text "All lands instantly start fighting", in reference to an early version of that Magic card.[3]