This article is using {{Card template}}.
See Help:Style guide/Card for how to edit this kind of article.
Edit this article
Lilian Voss
43031 • ICC_811
Regular 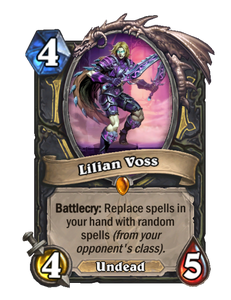 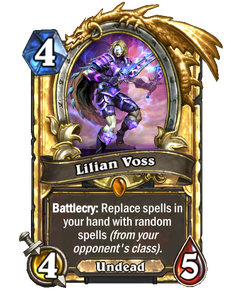 She doesn't feel pity, or remorse, or fear. And she absolutely will not stop... ever, until all necromancers are dead. 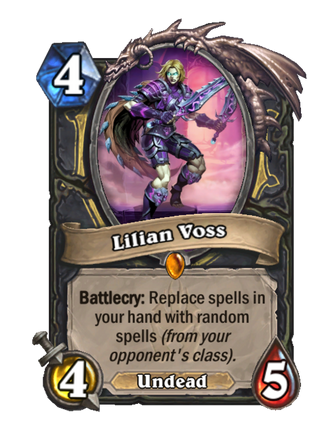 For other representations of Lilian, see Lilian Voss (disambiguation).

Lilian Voss is a legendary rogue minion card, from the Knights of the Frozen Throne set.

Lilian Voss is a potentially powerful minion, as Rogues not only frequently use multiple spells, but are able to generate cheap

Razorpetal Volley, which are almost guaranteed to be improved by being replaced by a spell from an opponent's class.

The spells generated have great synergy with cards like

If you have valuable spells in your hand that you wish to use, consider using them prior to summoning Lilian Voss, as their replacements may end up inferior.

Even with few spells replaced, Lilian Voss has great stats for her 4 mana cost, lining up with

Chillwind Yeti. This is especially true in Arena, where minions are valued more for their stats than synergy.

Lilian Voss is a recently "recovered" undead, first uncovered by the player from a coffin inside the Shadow Grave of Deathknell. Rejecting the Forsaken, Lilian has undertaken a single-minded crusade against both the Scarlet Crusade and all evil necromancers.

The player, while leveling in Tirisfal Glades, will often either encounter or hear about Lilian up until the player helps her kill her father High Priest Benedictus Voss. Later on she infiltrated the Scarlet Monastery and enlisted the aid of adventurers in order to retrieve the Blades of the Anointed and finish off

High Inquisitor Whitemane by stabbing her with them. She then took the blades and went to Scholomance to kill on Darkmaster Gandling, the headmaster of the necromancy school. Surviving the experience, she is later seen in Draenor hunting more necromancers.