This article is using {{Card template}}.
See Help:Style guide/Card for how to edit this kind of article.
Edit this article
Lil' Exorcist
2065 • GVG_097
Regular 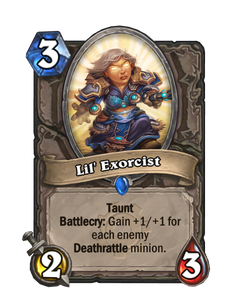 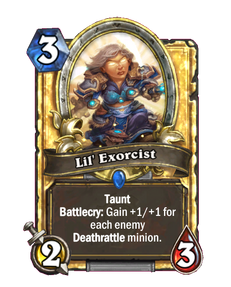 Warlocks have the town exorcist on speed dial in case they unleash the wrong demon. 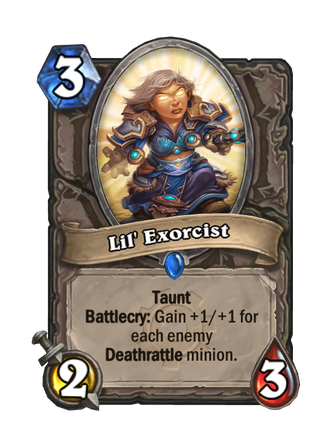 Lil' Exorcist is a rare neutral minion card, from the Goblins vs Gnomes set.

Ideal for use in a match against an opponent who uses a Deathrattle deck, featuring numerous smaller Deathrattle minions. The Taunt makes it effective for forcing the enemy to trade multiple smaller minions to remove it. However, it is very vulnerable to Silences, Transforms and

Ideally, make use of Lil' Exorcist before removing enemy Deathrattles, in order to get the most out of the Exorcist's Battlecry.

A great counter to

Soul of the Forest.