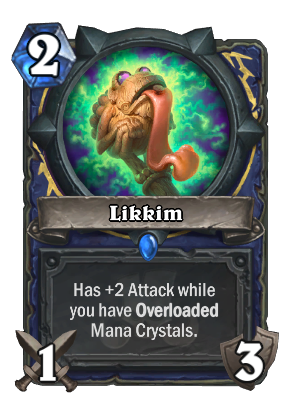 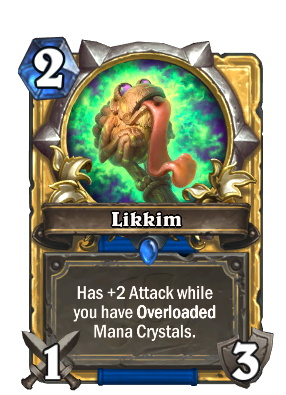 Has +2 Attack while you have Overloaded Mana Crystals.
Flavor text

"I double frog dare you!"

Likkim is an rare shaman weapon card, from the Rastakhan's Rumble set.

Likkim can be obtained through Rastakhan's Rumble card packs, or through crafting.

Likkim is comparable to Spirit Claws, being an effective weapon for early board control in addition to being able to deal up to 9 damage with 2 mana. Unlike Spirit Claws, however, Likkim's criterion for gaining attack is easier to achieve in a variety of Shaman decks, with cards like Sludge Slurper, Voltaic Burst, Feral Spirit, Lightning Storm, Rain of Toads, and Sandstorm Elemental all being commonly used Overload cards, as well as Volcano, Jade Claws, Totem Golem, and Flamewreathed Faceless in Wild, especially in aggressive decks. It retains its usefulness even late game, where finishers like Drustvar Horror and Shudderwock often triggering Overload.

Likkim is also a useful card in an Overload focused deck, having synergies with Thunderhead, Vessina, Lesser Sapphire Spellstone, and Snowfury Giant. Against control decks, Likkim can be used to lower your health total for healing cards to be more consistently useful.