This article is using {{Card template}}.
See Help:Style guide/Card for how to edit this kind of article.
Edit this article
Lightwell
797 • EX1_341
Regular 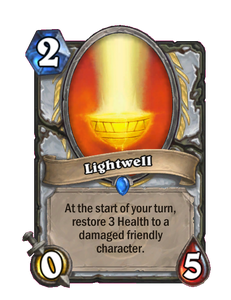 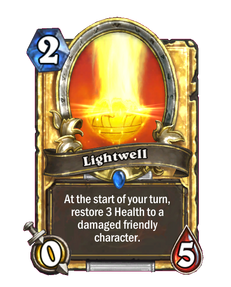 Dimensions: Full • 330 x 410px
At the start of your turn, restore 3 Health to a damaged friendly character.
Flavor text

It isn't clear if people ignore the Lightwell, or if it is just invisible. 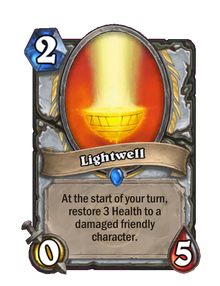 Lightwell is a rare priest minion card, inducted into the Legacy set, formerly from the Classic set. 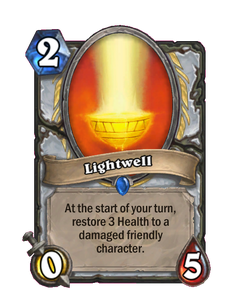 Without the ability to attack, Lightwell is very underwhelming on its own. In most cases, Lightwell is only a more expensive and less flexible Radiance, only mitigating 5 damage to the friendly hero. If it is clear that synergy with Lightwell does not exist in cases where it is randomly generated, it is often acceptable to completely ignore it. Even when Lightwell does remain on board over the course of multiple turns, it is still hopelessly outclassed by cards like Flash Heal, Divine Hymn, and Earthen Ring Farseer.

Lightwell still holds some potential with Divine Spirit and Inner Fire, but it is still far from viable with many better alternatives such as Injured Tol'vir, Deathlord, and Upgradeable Framebot.

This card has its origins in a priest spell from World of Warcraft. A lightwell is a summonable object which automatically heals injured targets. This card's flavor text refers to the original design of the lightwell, which required players to actively click on the well in order to receive healing. Players largely failed to do so, often to the frustration of the casting priest, whether because of ignorance of the well's functionality, or a lack of willingness to participate in their own healing. Eventually the lightwell was redesigned to automatically dispense heals, avoiding this problem.