This article is using {{Card template}}.
See Help:Style guide/Card for how to edit this kind of article.
Edit this article
Lightspawn
886 • EX1_335
Regular 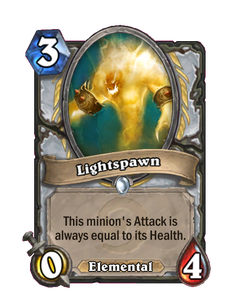 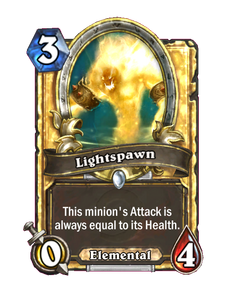 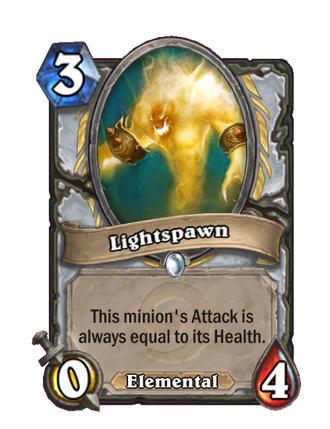 Lightspawn is a common priest minion card, inducted into the Legacy set, formerly from the Classic set. 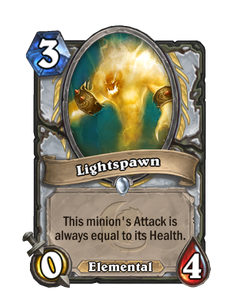 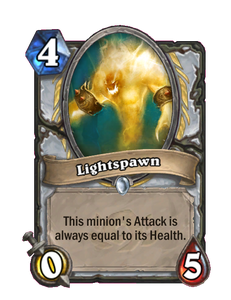 Two copies of regular Lightspawn are obtained for raising priest to level 1.

Two copies of golden Lightspawn (Core) are obtained for winning 50 games as priest.

Lightspawn (Core) is uncraftable and cannot be crafted or disenchanted.

Cards that increase maximum health are great for this card. Priests have a number of options such as

Power Word: Shield which can quickly increase Lightspawn's Attack to gargantuan levels. In ideal circumstances, casting a Power Word: Shield followed by 2 x Divine Spirit will transform the Lightspawn's initial 5/5 into a ridiculous 28/28 within a single turn. If your opponent has no Taunts on the field, this can single-handedly win the game.

Conversely, be aware that any damage taken will reduce the Lightspawn's Attack. Because of this, Lightspawn is probably most effective when attacking Heroes and targets with low Attack. Heal it regularly to maintain its power.

One little Silence renders this minion a harmless bystander, so you may want to avoid buffing it until the turn after it is summoned.

Original to Hearthstone, the Lightspawn was added to World of Warcraft with Legion. The priest champion Sol appears to be a named Lightspawn, and a generic "Lightspawn" mob serves as its stand-in when viewed by other players. Lightspawns can also be summoned by Vial of Pure Light.

The Lightspawn appears to be a Light elemental. The Lightspawns in World of Warcraft are of the Elemental creature type, and Sol is marked as a "Holy Priest" character.