For other appearances of Uther, see Uther Lightbringer (disambiguation). 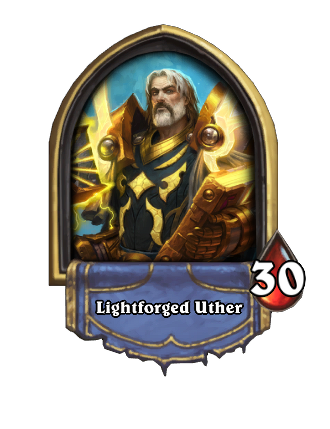 Lightforged Uther is a hero skin for the paladin class.

This portrait depicts a non-canon appearance where

Uther Lightbringer became part of the Army of Light.

The Grand Army of the Light, also called the Golden Army, the Army of Light, and the Lightforged, is a faction of enlightened races that the naaru said would one day combat the ravages of the Burning Legion. After the fall of Argus, the draenei's finest warriors followed the prime naaru Xe'ra across the cosmos in an eternal war to bring about the Legion's end. Since then, other survivors of the Burning Crusade have joined the ranks of the Lightforged. 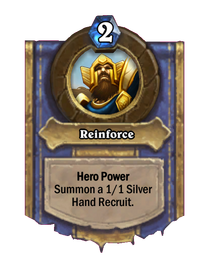 When viewed in the Collection, Lightforged Uther has the following flavor text:

Empowered by greater understanding, Uther is now ready to write his long-awaited sequel book, The Light and How to Forge It. Obtained from winning 1000 games as a Paladin in Ranked, Arena, or Duels.