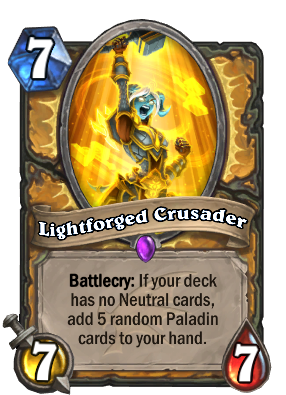 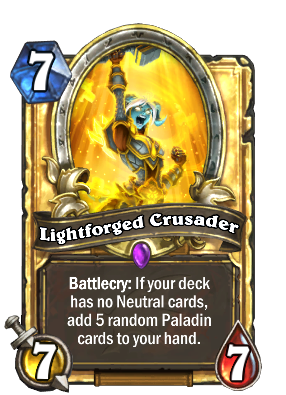 Battlecry: If your deck has no Neutral cards, add 5 random Paladin cards to your hand.
Flavor text

Self-appointed president of the Paladins Only Paladin Club.

Lightforged Crusader is an epic paladin minion card, from the Descent of Dragons set.

Lightforged Crusader can be obtained through Descent of Dragons card packs, or through crafting.

Lightforged Crusader boasts an extreme effect with an equally demanding deck-building restriction, as a deck with no neutral cards locks you out of many tech cards and otherwise useful minions. However, an extra 5 cards and a 7/7 body on the board can allow control decks to outvalue opponents and give midrange decks fuel for one more push.

You can combined a Non-Minion Deck with Lightforged Crusader for a combo with Prismatic Lens. This will provide some useful resources for the early to mid game.

Like Ivory Knight and Lay on Hands, Lightforged Crusader can be used as a Last Resort when you run out of cards.

You can combine Brann Bronzebeard with Lightforged Crusader to get a full hand.

One of her strongest effects is to save you a total of 10 cards from your deck, some can be played on the same turn, specially the 0 cost cards. Since you will lack of tech cards, she will give you alternate ways of contour.

You should run her in a deck with Holy Wrath or Prismatic Lens but never with Duel! or Commencement. These cards will completely ruin your trades.

Any deck that runs Lightforged Crusader should undoubtedly run Lightforged Zealot, another Paladin minion with the same deck-building restriction who also has a powerful Battlecry for its cost.

The Lightforged draenei are a group of draenei part of the Army of the Light and the Alliance. For untold millennia, the Army of the Light waged war against the Burning Legion throughout the Twisting Nether. The draenei most committed to their long crusade would undergo a ritual to become Lightforged, infusing their bodies with the very essence of the Holy Light. After finally achieving victory on Argus, the Lightforged draenei have undertaken a new mission: protecting Azeroth from rising threats, and helping their kin from the Alliance push back against Horde aggression. They became an allied race and pledged their loyalty to King Anduin Wrynn.