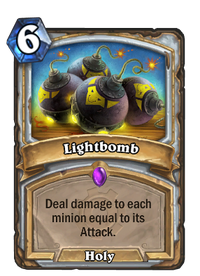 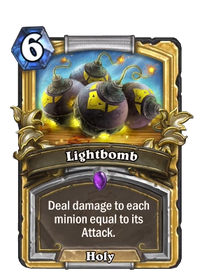 Deal damage to each minion equal to its Attack.
Flavor text

This is what happens when you allow goblins to be priests.

For the event version of this card, see Lightbomb (Event).

Lightbomb is an epic priest spell card, from the Goblins vs Gnomes set.

Lightbomb can be obtained through Goblins vs Gnomes card packs, or through crafting.

This card hits the player's own minions as well as those of the opponent, although it is worth bearing in mind the Priest's ability to consistently buff and restore Health. As a result of this, careful management of minion Health can result in this card not impacting the Priest's minions very much. However, enemy Priests can play using this card in mind, and may manage their own minions Health more carefully as a result.

Unless Prophet Velen is in play, it is unlikely that this card will always clear a board. However, as this card hits in the middle of the game, it is likely that trading will have occurred (Unless the other player is exceptionally aggressive), and will clear at least one minion. Similarly, this card hits many later game threats instantly, such as Molten Giant, Mountain Giant, and Dr. Boom, and can (very optionally), be used to trigger card Deathrattles, such as Sylvanas Windrunner in order to take an enemy minion that would survive the Lightbomb.