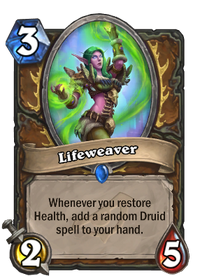 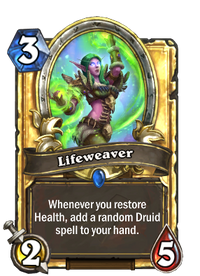 Whenever you restore Health, add a random Druid spell to your hand.

Lifeweaving is all well and good until it's time to cut the thread.

Lifeweaver is a rare druid minion card, from the Rise of Shadows set.

Lifeweaver can be obtained through Rise of Shadows card packs, or through crafting.

Lifeweaver is a great source of value-generation for druids focused on healing. It is an excellent source of spells for decks revolving around Lucentbark. Lifeweaver triggers each time you heal a target. You can get a lot of spells by healing multiple targets at once. For example, using Darkscale Healer to heal 5 characters will cause Lifeweaver to add 5 spells to your hand.

Lifeweaver's high health ensures that it survives longer. Since there are healing spells in the pool of druid's spells, you can chain healing and spell-generation.

However, lifeweaver requires healing to be good. Without any source of healing, lifeweaver won't trigger. Lifeweaver can also be killed easily later in the game.