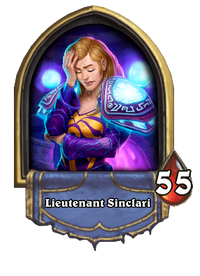 Lieutenant Sinclari is a boss that can be encountered in Chapter 2 of The Dalaran Heist adventure. 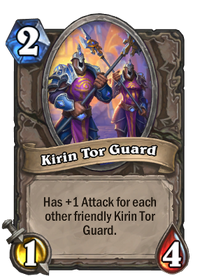 Fitting her disposition, Sinclari doesn't seem to have a strong gimmick or strategy to fight the player with. Her deck is a standard spell-heavy mage deck. Her Hero Power, giving taunt and +2 health to a minion, would be strong in a minion-heavy deck, but seems non-synergistic with the rest of her deck. As she is typically encountered late into the Dalaran Heist, the player should already have a strong deck with good treasures/passives at this point, allowing them to beat the boss without much trouble.

The only real threat comes from her legendaries: Ragnaros the Firelord, Kalecgos, Rhonin, Anomalus, Archmage Antonidas, and Medivh, the Guardian. Save your strong removal for these minions, or simply rush her down before she can play them, and this fight should be won easy.

Swampqueen Hagatha
The good Lieutenant is this prison's last line of defense.

Lieutenant Sinclari
You're giving me a headache.

Lieutenant Sinclari
Consider yourself promoted.
C'mon then. Put your backs into it.
Hold fast. We can do it.
To arms. We'll push them back!
You will not be forgotten!
You're the best we've got...

Lieutenant Sinclari
First demons, now these repugnant villains.
It's always when I'm on duty.
Surely some other guards should be here by now.

I could use your blade.

Can you deal with these intruders?

Ugh. As if you weren't annoying enough.

Well. Now we all know what you're planning.

Lieutenant Sinclari
The Violet Hold will... hold, I guess.

Lieutenant Sinclari is the lead warden of the Violet Hold. She has been protecting Dalaran since the Nexus War with Malygos, where she helped stop an invasion force of blue dragons lead by Cyanigosa. During the Third invasion of the Burning Legion, she once again orders adventurers to aid the Violet Hold, this time from an invasion of the Burning Legion. She expresses exasperation at the the higher ups of Dalaran not giving the Violet Hold more security to prevent it from happening again. This is shown by her character model having a unique "face-palm" pose.

In Hearthstone, she once again shows great annoyance at Dalaran being invaded, this time by the League of EVIL. She appears to be so vexed that she doesn't even take the invasion seriously.