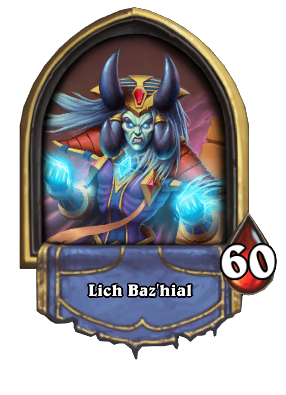 Baz'hial has cheated death. She also cheats at cards.

Lich Baz'hial is a boss that can be encountered initially in Chapter 3 of Tombs of Terror. After completing Chapter 3, this boss encounter will be available in any completed chapter.

Lich Baz'hial
You fight against the plagues? I rather like them.

Lich Baz'hial
I'll freeze you to your bones, heheh.
Reno Jackson
I hate the cold...

Lich Baz'hial
Liches don't have to be royalty to be worth fighting.
Yes, yes my soul is in that little phylactery. Don't mind it.
You may wonder what I'm doing here. So do I.

Stand there and watch me destroy you!

Won't you give my elementals a hug?

You're on time out.

Bah, get a real phylactery!

There's no room in this tomb for TWO liches!

Prince Arthas. The Lich King himself. Didn't you rotate?

Hahaha! Did you think this would deter me?

Lich Baz'hial
It could be worse. You could be un-dead!

Lich Baz'hial is unique to Hearthstone.