This article is using {{Card template}}.
See Help:Style guide/Card for how to edit this kind of article.
Edit this article
Leyline Manipulator
46541 • LOOT_537
Regular 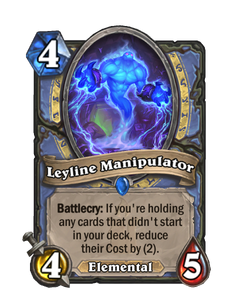 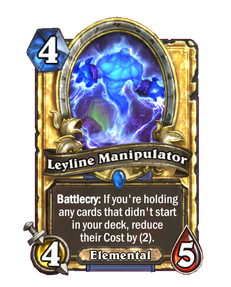 Dimensions: Full • 330 x 410px
Battlecry: If you're holding any cards that didn't start in your deck, reduce their Cost by (2).
Flavor text

The shortest distance between two points is a leyline. 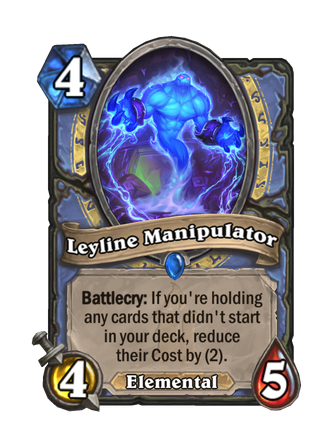 Leyline Manipulator is a rare mage minion card, from the Kobolds and Catacombs set.

Ethereal Peddler for Rogues, reducing the cost of cards you've gained off of other effects. If you are able to hoard a large amount of spells, it will give you much more value out of them. It also has fair stats for its cost, which means you can play it for its stats if necessary.

This is a key card for Exodia Mage as its main combo enabler. Using two copies of

Simulacrum, it discounts their cost just enough to allow it to combo with

Summon
This power is ecstasy.

Ley lines (or leylines) are channels of immense power that course through the earth itself like blood vessels carrying arcane magic instead of scarlet fluid. In Azeroth, the lines are artificially intersected by a series of 'anchors' to form a complex arrangement in which the whole planet is draped. Said junctions are catalogued in the Arcanomicon, the map of all ley lines gifted to

Malygos by the titan Norgannon.

Archmage Vargoth studied the ley lines of Draenor and discovered several similarities to those on Azeroth. He believed this may indicate a similar genesis.

The Mystic Runesabers feed on magic and have recently emerged from the shadows in search of ley lines. Stellagosa, and presumably the rest of the blue dragonflight, are capable of seeing the ley lines when they are underground.

Ley lines on the surface tend to crystallize in the form of glowing purple mana crystals.