This article is using {{Card template}}.
See Help:Style guide/Card for how to edit this kind of article.
Edit this article
Level Up!
45877 • LOOT_333
Regular 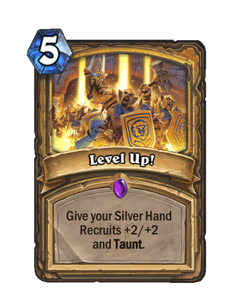 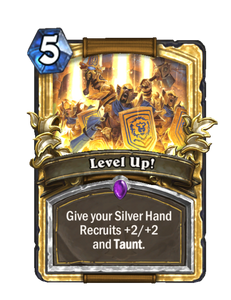 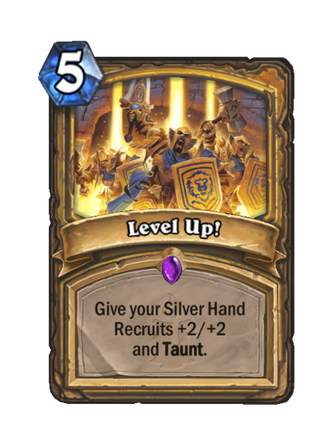 Level Up! is an epic paladin spell card, from the Kobolds and Catacombs set.

Stand Against Darkness, and

Lost in the Jungle, Level Up! can be used as a powerful finisher, much like

Bloodlust. It also has the versatility of being used for stalling. It's especially powerful if used following up

This card's change to 6 mana (after proving a powerful card for Odd Paladin) gives it a lot of competition for a deck slot:

Quartermaster does not give Taunt, but costs 1 less and puts a 2/5 body on the board alongside your buffed Recruits, and

Sunkeeper Tarim costs the same but has the flexibility of neutering powerful enemy minions and buffing non-Recruit minions.