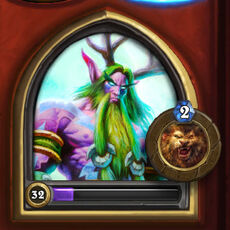 Each hero's level is displayed on the bottom-left of their portrait. The coloured bar shows their current experience.
A video explaining levels in Hearthstone made by the Curse Gamepedia YouTube Channel.

A level is a number assigned to each hero class. Each player's classes start at level 1, and levels can be gained for each by accumulating experience. Experience is gained by playing games, especially winning games, in that class. The current level cap is 60.

While displayed upon each individual hero, level is shared between all heroes of a given class, and can be increased by playing any hero of that class. For example, Medivh will immediately show the same level as the player's other mage heroes, such as Jaina Proudmoore, and gaining experience or levels as Medivh will also progress the other mage heroes.

A hero's level has no direct effect on gameplay, does not determine matchmaking, and is not visible to opponents. However, raising a hero of a given class to a new level will often reward players with new Basic cards. Above level 10, only golden versions of existing Basic cards are awarded, meaning that once a class has reached level 10, no further impact on gameplay will result from increasing its level. There is one exception: Tavern Brawl mode, which is not unlocked until the player reaches level 20 with at least one class.

Each hero's current level and experience can be checked in the Quest Log, or by viewing a deck using that hero on any of the deck selection screens, and is also displayed at the end of each match.

After completing the Ashes of Outland Prologue, Demon Hunter will be unlocked at level 20 immediately. 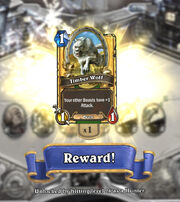 Golden Timber Wolf, the reward for raising a hunter to level 26

As a hero reaches various levels, they are awarded new cards. The card awarded depends on the hero and level reached. All cards awarded by gaining levels cannot be crafted or disenchanted.

Up to level 10, reaching each even-numbered level will reward the player with a new Basic card x 2 for that hero's class. These cards are not obtainable through any other means. These cards constitute half of each class' Basic cards.

Between levels 11 and 50 (52 for mage and warrior, 20-60 for demon hunter), golden class-specific Basic cards are awarded.

These cards are awarded one at a time, at each of the levels shown. The levels at which cards are awarded are the same for all classes, except demon hunters, mages and warriors. These classes award one pair fewer golden neutral minion cards, and award their last class-specific card slightly later, as shown in the table below. 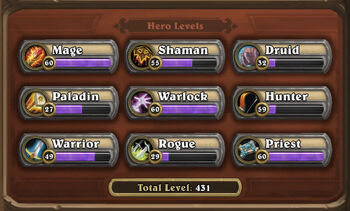