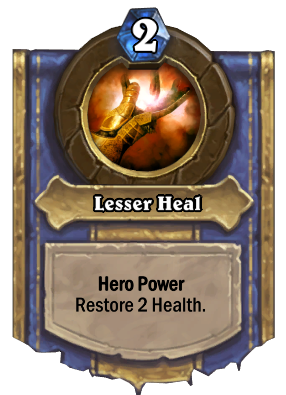 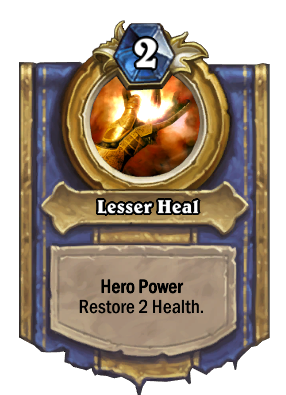 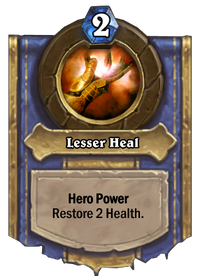 Being the only Hero Power capable of directed healing, Lesser Heal makes the priest by far the most capable healing class in the game. It is a highly strategic Hero Power, with much of its utility depending on the state of the board.

Lesser Heal tends to be strong in the late game, where players often have mana to spare at the end of each turn; healing the hero for 2 Health each turn can provide a strong advantage over time. Lesser Heal is a great counter to burst damage, and to Steady Shot in particular, although the loss of tempo from using the Power makes it less effective for this in the early game. Lesser Heal is what allows priests to so often come back from the brink of defeat, steadily healing from near death to crush the opponent with superior late game cards. Lesser Heal is a key reason for control decks being the most common type of priest deck.

However, arguably the greatest strength of Lesser Heal is in healing the priest's minions. This can allow minions to trade very efficiently, repeatedly killing enemy minions before then healing back to a safe Health level. Even a 1/3 Northshire Cleric can repeatedly trade against 2/1s before healing each time, and larger minions can prove almost unkillable, especially with cards like Power Word: Shield to further reinforce them. It can also provide light protection from Execute, forcing the opponent to damage the minion first.

Another strength of Lesser Heal is to trigger healing-related effects, like that of Northshire Cleric, Holy Champion or Lightwarden.

Finally, Lesser Heal provides a very handy source of damage when combined with effects like Auchenai Soulpriest and Embrace the Shadow. While cards like Flash Heal and Circle of Healing provide a bigger effect overall, Lesser Heal provides a targetable and more importantly renewable damage source, which can be used each turn to dominate the board or finish off the opponent. A damage-dealing Lesser Heal can be used on minions very similarly to its healing, finishing off damaged enemy minions for efficient trades, or removing weaker minions entirely, and directly outstrips the mage's Fireblast.